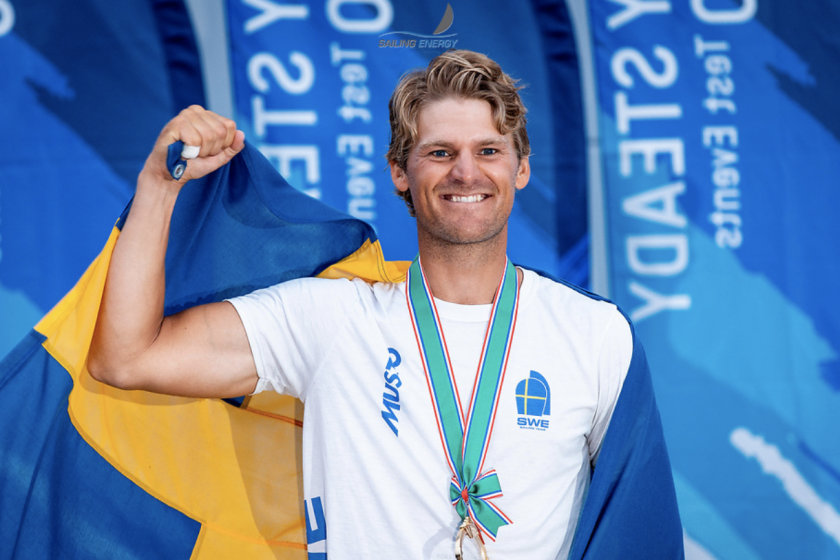 How old were you when you started sailing? I started sailing quite early around when I was six years old. I got into sailing since my mother was sailing when she was younger and was a trainer in our local club. Like every other kid in Sweden at that time I started with the Optimist.

Why did you first decide to sail the Laser? After growing out of the Optimist and then the Europe dinghy quite quickly, I got into the Laser as that was the next natural step. I think my mother was a big influence for me choosing the Laser as well, as she already had one and liked the boat.

When you were getting involved in sailing the Laser, were there any specific sailors you looked up to? I think I mostly looked up to some of the sailors that were best in Sweden at that time, Johan Wigforss and Arvid Claesson. And then of course Karl Sunesson and Daniel Birgmark. Unfortunately, those legends had already stopped when I started competing, but both of them actually made comebacks so I have competed against them. Scheidt is of course the biggest legend of them all – so it’s so cool he’s still competing and somehow still showing us how it’s done.

Fast-forward to 2016 and you competed in your first Olympic Games at Rio. What was the turning point for you in those years between that set you up to qualify? After missing to qualify for London 2012 I was a bit disappointed, but it made me really determined to qualify for Rio. So I trained a lot (on my own) during the fall of 2012, which set me up for a really good season in 2013. Most of the other guys probably had a break after the Games so I used that window to try and catch up. In 2015 my Swedish training partner and competitor for the Rio spot stopped so it was up to me to get results that were good enough for our Olympic committee. It took a bit longer than I would have liked – but after winning the Europeans I was selected.

How would you describe your first experience competing in the Olympics? What did you learn that has helped you in your 2020 campaign? The Olympics was quite a disappointment for me for a couple of reasons. This is going to make me sound like a bitter person, but (rant-mode on:) I think that some of the sails we were given at the Games were complete bullocks. I had a hard time managing to hold my lanes around the course, so a thing that was one of my strengths and something I usually did quite well didn’t work at all (end rant). Mentally I don’t think I handled that setback very well either. In hindsight I don’t think that I would have won the Games with a perfect sail either. After all, the guy who had been dominating for the last couple of years won.

Well with age you become wiser and I have a lot of age now, and hopefully some more wisdom, and since sailing is an experience sport, things should start working out better and better for me… 😊 One thing that I wrote down after the last cycle was to enjoy every event and training camp and don’t just see all events as a stepping stone towards the Games. It’s not all about the Games, it’s just one of the events that is part of the bigger journey.

Another thing was to try taking advantage of the fact that I’m sailing the Laser. Even though I don’t mind training in Sweden in the autumn when it’s cold – it can be nice to go somewhere warm and exotic and sailing the Laser really allows you to do that with minimal logistics required.

This past winter you won the Caribbean Laser Midwinters in the Dominican Republic – what led you to compete at that regatta and what went well for you there? Rasmus Myrgren always used to go to Cabarete when he was sailing and he had only good things to say about it. So when we were searching for a venue with waves and wind for our training in the beginning of the year, Cabarete was the perfect choice. It’s an incredible place to sail, and I urge everyone who has the chance to go there!

I was quite quick around the course speed-wise, and since there weren’t that many of us competing you always had room around you and could express that speed. I actually think Hermann sailed better then me most of the regatta, but he thought he had to be closer to me in the last race so he made a bit of a gamble that didn’t pay out.

Your most recent success was your gold medal at the Olympic test event in Japan: Ready Set Tokyo! Tell us about that regatta. What were some of the challenges, and what clicked for you to stay consistent? (Without giving away your secrets of course!) Compared to what we usually have in Enoshima I think the conditions were quite shifty during the event. So instead of one corner always paying, we had more shifts and therefore more opportunities to get to the top mark in a good position. And that was one of the things I did really well during the event – I identified what kind of conditions it was and was sailing the wind rather than the fleet. It probably helped that I was starting quite bad some of the races… 😊

How did Ready Set Tokyo compare to the Sailing World Cup Enoshima that followed where you placed fifth? The World Cup was more of the normal Enoshima sailing where you had to go all the way to the corners. For me the biggest difference was that during the test event I was more or less always good around the first top mark. During the last eight races of the World Cup I think I averaged around 25… So it was more of a comeback regatta, something that went fairly well even though I think the result was much better than it actually felt. But I guess there were more of us with that feeling. Last regatta of the season, very windy and demanding conditions, and a lot of us had a really long trip in Japan – everybody was really exhausted…

In the final months leading up to the 2020 Olympics, do you feel well prepared? What are some areas that you plan to work on in the remaining time? I feel in quite a good position here 10 months before the games. Fortunately, there are always things to improve in this complex sport. Downwind is an area that always needs work especially in the big swells expected in Enoshima.

While you are sailing against an extremely strong fleet of Laser sailors, it is often about minimizing mistakes at this level. How do you work at reducing mistakes, or minimizing their impact? I think it was Ian Percy who once told me that he and Bart had a saying when they were sailing that simply stated “onwards” to keep from getting annoyed at decisions you’ve already made. And it is so true. You can dwell and get angry (I’m a master at that…) but it doesn’t help. You can only try to make the best decisions from where you are at that moment. Thinking about what was or could have been if this or that happened never helps during racing. It is quite basic – but it is super hard to not let emotions get in the way of your decisions.

It seems that you have taken an interest to some other classes as well – competing in 49er and Star regattas! What led you to try racing in those classes? Do you plan to continue? Do you prefer one over the other? After the Games I was fed up with the Laser so I wanted to try another class. It was such a joy to learn to sail the 49er and sailing with another person. Starting out, you’re at the point where just getting out of the harbor is an issue, let alone getting around the course when the wind is up. So your learning curve is sooo steep – something that is really rewarding. Then you learn how to control the boat and can start racing, and then you realize you can’t really control the boat after all. But it is super fun, and it’s fun to just go out for a sail on your own not even racing in the right conditions. The Star is like the Laser – it’s not the most exciting boat to sail, but the racing is exceptional. So for racing I choose Star, for sailing joy 49er!

Do you have any particular “rituals” or routines that you do before going out on the water to compete? Not really. Of course preparing with looking through the forecasts and looking through the boat so I don’t have any breakages. Listening to some good tunes to get into the right mood…

What do you enjoy doing when you need a break from sailing? If I’m on a training camp I read a lot or play guitar if I brought one. If we have a bit more of the Swedish team at the same place we play quite a lot of board games as well. I go up a lot in music as well, so listening and finding new music is a hobby. When at home I try to spend as much time as possible with my son. We tend to go to our summer house quite often as it’s such a relaxing environment. Another really good break is going somewhere for a bike or cross-country holiday. Perfect as an athlete were it’s more or less considered work… 😊

What is your favorite place that you have traveled to because of sailing?
I really enjoyed the first Worlds I did in Halifax in ’09. The people there was just so friendly and nice. And the nature was beautiful. Maybe I was just charmed because it was my first Worlds… I also really liked Freemantle – awesome sailing and a cool place. Cabarete was awesome and Enoshima has its charm as well.

Oh, and I can’t forget Garda. Everything there is awesome – the sailing (not racing though…), cycling, the food, and if you like wine as much as me that’s a reason in itself to go there. We have the luxury to be traveling to and experiencing some really nice places in sailing – something I think is one of the best parts of our sport.

What would you like readers to know about Jesper Stålheim as a person? I’m a metalhead… haha jk. Dunno really. I have a five-year-old son called Malcolm that a lot of people might not know about. And I’m very ironic/sarcastic about everything all the time. Probably a bad habit I should get rid of!