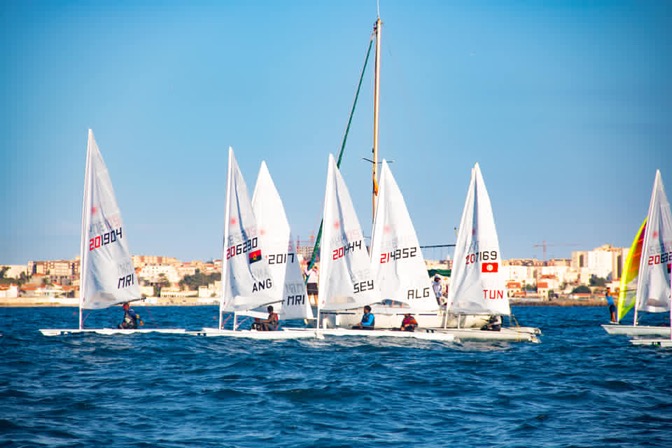 (Algiers, Algeria) Yesterday was the first day of racing at the 2019 African Laser Standard & Radial Championships. It is a continental qualification event for the 2020 Tokyo Olympics where the top two countries will earn berths at this event.

Three races were completed on October 8, the first day of the Championships. With varying wind conditions, around six to 10 knots, it was a very relaxed atmosphere.

In the Laser Standard fleet, Kebaili Mohamed of Algeria won the first race, while Govinden Rodney of Seychelles won the second, and Angola’s Manuel Lelo claimed the third race of the day. It is clear this will be a very competitive regatta week. At the end of the day Lelo was atop the leaderboard, with Mohamed tied with Algerian Khoualed Islam just behind.

The Radial fleet also sailed three races, and each was championed by different sailors as in the Standard fleet. Egypt’s Khoulouf Mansy and Aya El Zeni won the first two races respectively, and Deisy Nhaquile of Mozambique sailed across the finish line in first for the last race of the day. Nhaquile was sitting in first overall after Day 1, with Mansy and El Zeni behind. There were no OCS and only one protest in the fleet.

Racing will continue through Saturday October 12.