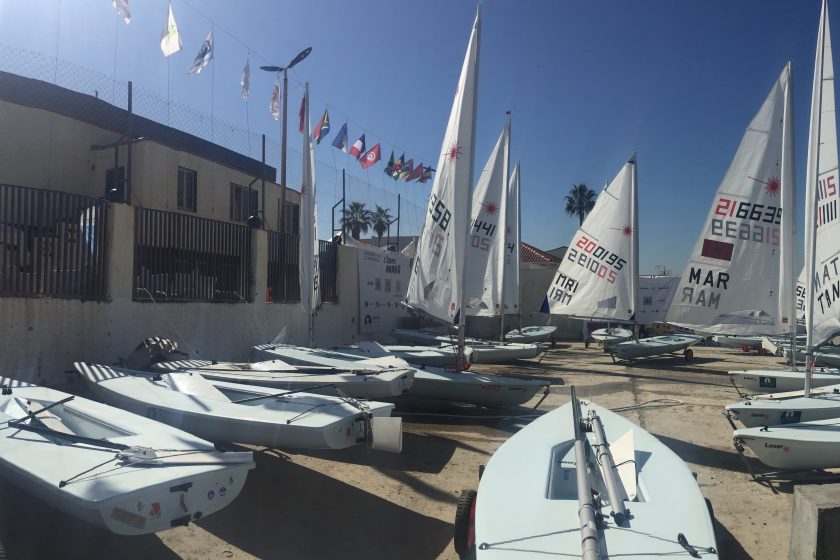 (Algiers, Algeria) Light winds prevailed on the second day of racing at the 2019 African Laser Standard & Radial Championships. Two races were completed in each fleet and competition is high, chasing the Olympic qualification at the end of the event.

In the Laser Standard fleet, there have been five different winners of the five races thus far. On Day 2, Egypt’s Aly Badawy won race 4 and Algerian Islam Khoualed took race 5, pushing both up on the provisional results. The athlete from the host country is leading with 14 net points ahead of the Egyptian who has the same net score. In third place with 15 points is Rodney Govinden of Seychelles, followed by Algeria’s Mohamed Kebaili also with 15 points, and the first day’s winner Manuel Lelo of Angola has 16 points after Day 2. These five athletes are the five winners of the first two days’ five races, clearly on a close fight for the desired African title and the consequent Olympic qualification for Tokyo 2020. The top two countries will earn berths out of the eight represented: Algeria, Angola, Egypt, Morocco, Mauritius, Seychelles, Tanzania, and Tunisia.

In the Radial fleet, it’s becoming a bit more clear with two athletes dominating the scoreboard. Carving a 12-point difference from third place is Egyptian Khouloud Mansy who secured three wins out of five races (R1, R4, and R5) and has a two-point lead over Mozambique’s Deisy Nhaquile. Nhaquile has seven points and one win, but was obliged to retire from the fifth race after getting her second yellow flag (R.42). The other Day-2 win came from the fleet’s youngest sailor, 17-year-old Aya El-Zeiny of Egypt. She sits in third place with 17 points, ahead of the two high-ranked Algerians Maissa Abdelfettah and Mallia Karassane who also have 17 points. It will be a great fight for the podium in this class. And Annaelle Felicie of Mauritius and Algerian Sana Lechehab are only one point away.

The forecast for Day 3 has stronger winds and high activity on the water. For regatta updates, see the event Facebook page. Results shared below.