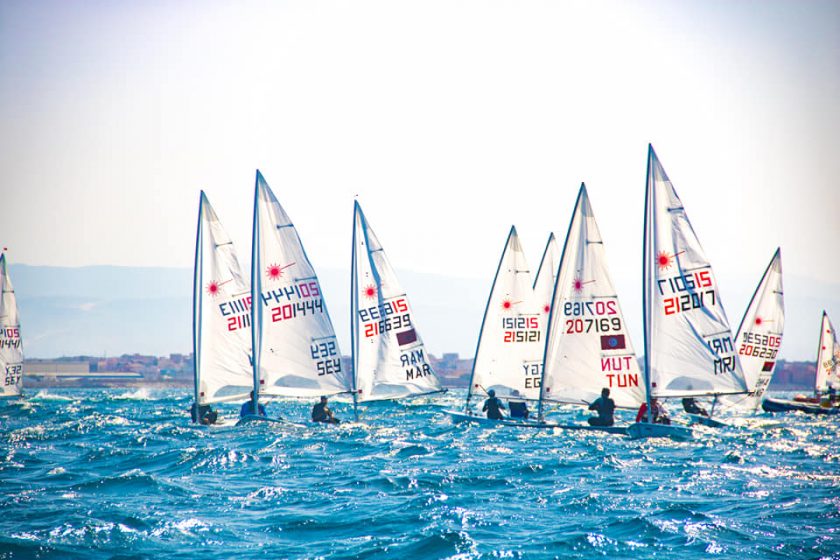 (Algiers, Algeria) After a long Day 4, including protest hearings that could change the final medal race day, the Olympic qualifications were becoming clear at the 2019 African Laser Championships. Although, it was still mathematically possible for the third-place athletes to qualify their countries in the medal race.

The medal race day began with a forecast of very light winds, threatening the time limited race starts: 14:00 for Laser Standards and 14:40 for Laser Radials. Both races were sailed under 6–8 knots with some match racing strategies, as everyone was aware of the double-point results and umpire direct penalty decisions.

In the Standard fleet, Angola’s Filipe André was the winner of the medal cace, followed by Algerian Wassim Ziali and Rodney Govinden of Seychelles, which secured for Govinden the Championship gold medal and an Olympic qualification for Seychelles. As expected, Angola’s Manuel Lelo got involved in a direct battle with Allan Julie of Seychelles for third place overall, with the latter facing more difficulties due to the light wind conditions. They started the medal race with same number of net points and finished in 8th and 9th, which determined Lelo’s bronze medal at the African Championships – one position away from qualifying for the 2020 Olympics. Along with Govinden, Aly Badawy qualified Egypt for the Olympics by winning the silver medal. He maintained control over both Lelo and Julie right up to the finish line, on a very tight last leg. The final difference from third to ninth, after 11 races and a medal race, was only 10 points – showing how competitive this cass can be in Africa!

For the Radial fleet, Mozambique’s Deisy Nhaquile charged early for the win in the medal race, dominating until the end and claiming the African Championship title and the very first sailing Olympic qualification for Mozambique! Egyptian Khouloud Mansy won the silver medal after finishing fourth in the medal race, also securing Egypt a slot in the Olympics. Bronze went to Algeria’s Malia Karassane after she finished third it the medal race, just behind her Algerian teammate Sana Lechehab, both of which were fighting for bronze and a mathematical possibility of repeating the 2016 Rio Algerian qualification in this class.

For regatta updates, see the event Facebook page. Results after Day 3 shared below.