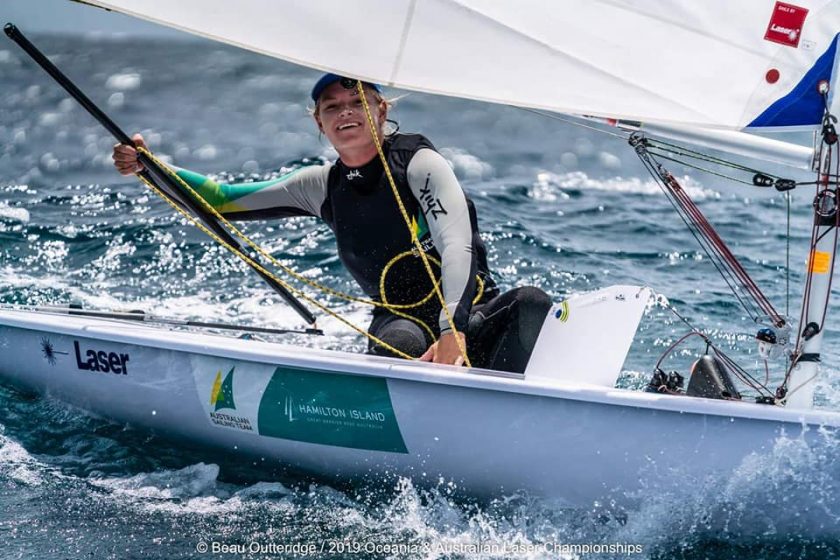 How old were you when you started sailing? Well I grew up living on a boat so I did my first yacht race at five months old (apparently), but didn’t really get into dinghy sailing until I was around 15 when my family arrived back in Australia.

When did you start racing and in what type of boat? The first serious racing I did was on my family home, a 50-foot cat my father designed and built. To begin with, we did a fair bit of offshore racing within Australia, then cruised to Southeast Asia and competed on the regatta circuit there for three seasons, which is where I learnt to love the competition.

What was the coolest place you visited when living on your boat and why? Ambon, Indonesia! Drifting into such a foreign place in a sudden glassy calm, in the middle of the night, to an incredible traditional welcome, after winning line honors in a 565nm ocean race from Darwin (in which there had been plenty of wind) as a slightly delirious and culture-shocked 12-year-old is something I’ll never forget!

Why did you first decide to sail the Laser? And what has kept you sailing it since? After returning to Australia for the Multihull Nationals, which we won, I decided I wanted my own boat so started sailing the Laser (initially with the Standard rig because I didn’t know any better and didn’t like to lose, before stepping down to the Radial as I was still only 55kg). I love the simplicity of one-design racing and enjoy being solely responsible for my performance on the water. I also think the competition in the Laser class is unparalleled in both quantity and quality!

When you were first getting involved in sailing the Laser, were there any specific sailors you looked up to or strived to be like some day? Not really coming from a dinghy background, my heroes were people like Ellen MacArthur, Michel Desjoyeaux, and Francis Joyon, but now I have a bit of froth for most people, I think everyone has an aspect or two worth striving to replicate!

You were probably one of the youngest sailors competing in the 2017 Radial Worlds in Medemblik against Olympians and World Champions, yet you managed to finish top three in some races. What was it like competing at such a high level and what went well for you there? It was pretty daunting to suddenly be racing the world’s best, but the conditions in Medemblik are a lot like where I’m from at home, so I felt pretty comfortable there. Day 2, when I scored a 2nd and 1st, was a huge boost for me and provided invaluable experience in competing at the pointy end. I think it helped being so green to it all in a way, as I was a little oblivious to how good the people around me were and I didn’t really have any expectations.

2019 has been a solid year for you, finishing top 10 in a few major international regattas. What did you work on in 2018 that set you up for success this year? I worked hard throughout 2018 but produced two underwhelming results back to back at the U21 Worlds and Worlds in Aarhus after which I realized I needed to change my mentality more than anything. I came home and worked my frustration away for the rest of the year, then spent a bit of time out of the boat with injuries early in 2019, so had plenty of time to refocus. In the end I found some flow in Europe, heading over feeling much more relaxed.

Tell us about your sailing marathon, an unusual feat! What drove you to do it, did any other sailors join you, and would you ever do it again? My downwind sailing needed work so I decided a 150-km offshore session should help out (not here to put shoes on centipedes)! I also wanted to test myself, I felt if I could put myself through something extreme with success, I’d have something to draw on when things got tough in training or regattas. For some reason no other sailors joined me 🤔but my parents did accompany me on the yacht. I definitely do want to do another one (my downwind sailing still needs work) but next time I don’t think I’ll get impatient and just decide to go anyway if the forecast blows out to 30–35 knots like it did last time, that was a rough 12 hours!

There are a few of you competing for the Olympic selection in the Laser Radial. What’s your relationship like with those women on and off the water? I’ve been really lucky to have come along at a time when the national competition was strong, we’re all within a year or two in age and have spent a lot of time traveling, staying, and competing together from our first international year in 2017 so get on pretty well and have plenty to bond over! We’re from all over the country so don’t all train together that often but when we do I’d say we have a good dynamic.

With your eye on Tokyo, what are your strengths that you plan to enhance and what areas do you need to improve in the next few months? As I’m still relatively inexperienced compared to a lot of the fleet, my main focus is on amassing as much racing experience as possible but it’s an exciting time and I look forward to getting the most out of the next few months! I need to work on not allowing my instinct to be overwhelmed by expectation, as I think this can swing from being one of my biggest strengths to my biggest weakness.

While you are sailing against an extremely strong fleet of experienced Laser Radial sailors, it is often about minimizing mistakes at this level. How do you work at reducing mistakes, or minimizing their impact? At this stage I seem to be working on a process-of-elimination basis, familiarizing myself with all the mistakes so I know what to avoid! I’m gradually narrowing down a style that works for me but at the moment a lot of my sailing is still experimental so sometimes things click and sometimes they don’t!

Do you have any particular “rituals” or routines that you do before going out on the water to compete? Not really, I generally function on very flexible routines and enjoy playing around with my time to accommodate what I think will be the priorities of the day. I try to never take myself too seriously in the mornings, or at any point for that matter!

Have you attained a degree already or do you plan to pursue a degree in the future? In what area of study? As soon as I have time to give it the time and commitment required, I plan on returning to an Engineering degree that I deferred immediately after finishing school in an attempt to fast-track my sailing and compensate for a late start in the Laser. You could say I’m a bit of a perfectionist as I have no urgency to do something if I can’t do it properly! Ultimately I want to work in the renewable energy field.

What do you enjoy doing when you need a break from sailing? More sailing! I enjoy spending time sailing different (faster) boats in my time away from the Laser, otherwise I’ll give most physical/outdoor activities a shot. Spending time with friends and family is also important to balance out the traveling and competition.

What would you like readers to know about Mara Stransky as a person? How incredibly thankful I am to be able to pursue this dream, although it’s a single-handed class, everything about the Laser is better done as a team and I have a fantastic one of those! I’m a firm believer in everything being more fun, if there’s an element of impossibility about it.