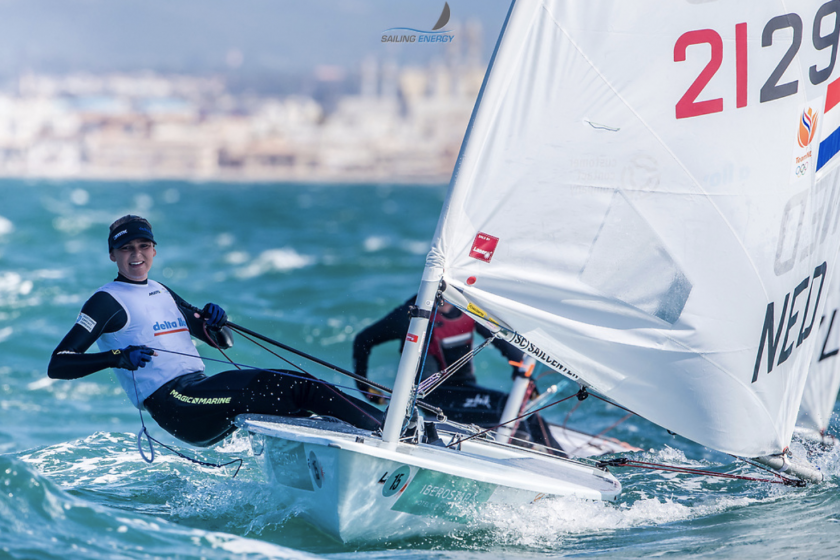 How did you get involved with sailing? Both of my parents are sailors. My dad did a campaign for the Olympics in the Soling for the 1984 Games in LA. He was very close but didn’t make it. But he knows what it’s like to train hard and do sailing competitions. My parents introduced me to sailing when I was 7 years old. As most of the sailors, I started in the Optimist. I got more serious when I was 12 and made it to the national Optimist team.

What made you decide to sail the Laser Radial and what has kept you sailing it since? After the Opti I decided to go for Lasers because I would not depend on someone else. I still really like that. Besides, I hate doing boat work and the Laser is nice and easy.

Were there any sailors that you strived to be like when you were first getting involved? Marit was the first successful Radial sailor in Holland so of course she was a role model to me. I didn’t realize we would ever be training and competing against each other. I still look up to her as a sailor but definitely in a different way now than back in the day.

What was your first international podium? After the Optimist I got the opportunity to try to qualify for the Youth Olympic Games in 2010, Singapore. I went to the Europeans and the World Championship in the Byte. I qualified by winning bronze at both events. That was my first international podium. I was never a top sailor in the optimist but this gave a big boost to my confidence and led to winning silver at the Youth Olympics. That was an amazing experience and gave me big motivation to aim for the “real” Olympics.

In 2017 you had a very successful event at the Laser Radial Worlds in Medemblik, finishing 7th overall. What went well for you at this particular Worlds? I think it definitely helped that it was in my own country. Not specifically racing-wise, because we usually train in Scheveningen, but I had a lot of support from friends and family. Also, I had no expectations since I just came back from an injury. That is always a nice feeling.

The 2019 Laser Radial Worlds in Sakaiminato was an important event of the year, and you managed to finish in 11th. Tell us about that regatta and what lead you to having such a solid performance.  This was the most difficult regatta I have ever sailed. It was a very difficult venue to read the wind. Shifts were very big and very unpredictable. I was really happy with my speed and most of my decisions but sometimes it just felt like we were playing the roulette game. Guess I have to improve my offshore racing skills.

As you’re competing in a very talented and experienced fleet of Radial sailors, how do you work at minimizing mistakes and maintaining mental composure on the race course? I think the level of the Radial fleet is growing every year and I think the differences of skill are getting less. Which means that differences are made on your mentality. I take this part very seriously and I work with a mental coach.

You are part of a very strong Laser Radial team for the Netherlands. Tell us about your relationship with Maxime Jonker and Marit Bouwmeester. How long have you known each other? Do you all train together? Although you’re all teammates, is there a feeling of high competition as you all are chasing the same goal? I’ve been sailing with Maxime since I was 12 years old. We have always been on the same team and we experienced so much together. Most of the times she was/is my roommate when we are abroad. I’ve seen her more than my own sister so she became like a sister to me – which means we have fun but also have our fights and get annoyed with each other! Marit and I have never been on the same team until now. Now the trials are over, there is not a feeling of high competition anymore I guess.

With Marit heading to the Tokyo Olympics, what are your plans for 2020? I must say I had a hard time after our Olympic trials were finished in Enoshima last year. Especially because the next Games were six years away! That felt so demotivating that I decided to quit for a while. I finished my studies and did an internship. That’s when I realized I was not ready for a working life yet and I got motivated to get back.

It meant that I had to set new goals since Tokyo was not realistic anymore. I decided to focus on more short-term goals like World Championships and World Cups. Also for 2020. And furthermore I still enjoy working hard to get better. I’m privileged to work with Marit this season and I hope to learn a lot.

At this point in time, do you think you’ll campaign for the Paris Olympics in 2024? I still like my short-term goals for now.

Are you still at a university? Do you plan to use your degree later in life? I finished my degree in Media & Entertainment Management. My field of study was audiovisual productions. I really enjoy making videos and I am very keen to work in a creative surrounding in the future. Also I sometimes make Vlogs for fun – called Daphne’s World.

What is it like to juggle being a student and sailing at such a high level? It was hard and it took me a very long time, but I somehow managed.

What is your favorite activity/hobby outside of sailing? I like to play squash and enjoy video-editing. I also like baking cakes and eating them!

How do you like to spend your free time when you’re not sailing? I enjoy spending time with friends and family. Boring answer but true.

Where is your favorite place that you have traveled to for sailing? Garda is definitely on that top list! Great food, good wind, and SO incredibly beautiful. Mexico and Oman are also beautiful places but I feel more at home in Europe. The bread tastes better in Europe and I really like bread with just butter.

What would you like readers to know about Daphne van der Vaart as a person? I never wear the same socks. Not because I’m superstitious or anything but I just somehow manage to lose them. Now I really like to steal socks from other sailors. Muahaha. And some say I have a talent for the song game: Next time you see me, mention a word and I’ll come up with a song!