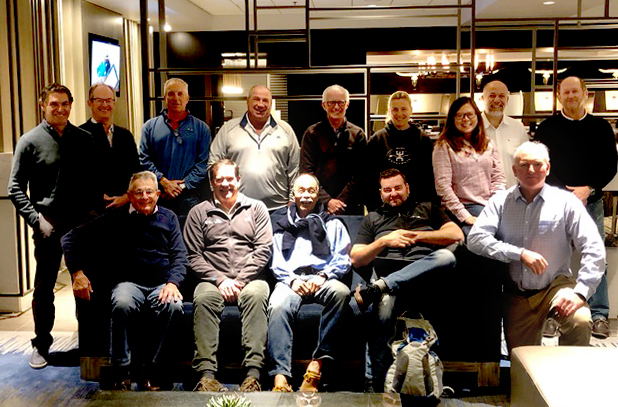 ILCA World Council held its annual meeting on 23 and 24 November 2019. The meeting began with a recognition that this was the first meeting without Jeff Martin serving the class. A moment of silence was observed in honor of Jeff’s contribution to the class for over four decades that came to an end with his unexpected death earlier this year.

There are a number of items from the meeting to highlight.

A report was received evaluating progress towards the development of a composite Radial lower mast for production and release. Several masts have been in testing over the past year and as the technical specifications are finalized more test spars will soon be released. It is anticipated that spars will be entering the market worldwide after the 2020 Tokyo Olympics with a target release date at the beginning of September 2020.

The World Council also received reports on the progress of instituting processes to comply with World Sailing’s Olympic Equipment Policy, which requires that all Olympic classes are open to any interested and qualified manufacturer. A report was also received regarding the independent audit of the results of the 2019 rule change vote that amended the Definition of Builder in the Class Rules. With the independent validation of the member vote, the World Council approved a resolution to accept and certify the results of the rule change vote and now considers this matter fully concluded.

With formal approval of the rule change by the members and World Sailing, ILCA can now begin the process of approving new manufacturers in order to comply with World Sailing and European Union requirements for Olympic equipment supply. After receiving initial applications from a number of interested parties, a committee has reviewed the submissions and will soon be moving to the next phase of the process, which will involve submission of a more detailed and comprehensive application and a more detailed evaluation.

The process of appointing new builders was previously delayed until final confirmation of Olympic status for 2024 was received from World Sailing in mid-September. In spite of this delay, it is anticipated that equipment from new manufacturers will become available to sailors before the end of 2020. However, it was noted that the entire process represents a significant departure from past practices and there may be unanticipated issues that could affect that schedule. Nevertheless, there was quite a bit of optimism expressed for the future of the class, especially on behalf of sailors in those parts of the world that have been under served for many years. In parallel, Laser Performance is also in process to become an approved builder.

The Treasurer’s report projected a larger than normal budget deficit for the 2019 fiscal year due to expenses involved in working to secure the status of the Laser Class in the 2024 Olympic games, as well as preparing the way for new manufacturers of class legal boats and equipment. ILCA is fortunate to maintain reserves sufficient to cover unusual expenses of this type and, based on conservative projections, it is anticipated that there will be a gradual rebuilding of reserves as the class moves forward into the next quadrennium.

The loss of Jeff Martin has left a void in the class staffing, and the office is looking to pick up additional staff to address needs related to event support, engagement with World Sailing and technical oversight of new Builders to ensure uniformity of equipment.

A report from the Technical Officer on factory audits of current approved Builders (as well as Laser Performance) indicates that manufacturers continue to produce hulls within tight limits, facilitating the true one-design aspect of our competitions.

The World Council approved the recommendation of the Technical and Measurement Committee to put forward a rule change for member vote to incorporate one of the recent rule interpretations (where a sheaveless block can be used in the hiking strap adjustment system). In addition, there is a longer term project under way, led by Chief Measurer Aileen Loo,  to re-write the Laser Class rules to conform with World Sailing’s Equipment Rules format.

Those World Council members who attended the recent World Sailing Annual Conference provided a recap of meeting and issues that may effect the class. One of the key items highlighted is that there will continue to be pressure from other classes looking to replace our class as named equipment for World Sailing events and it is critical for ILCA to be proactive in addressing this. ILCA will continue to improve in supporting sailors world wide, especially in areas of the world that have not been well served or do not have a long established history of dinghy sailing competition, and in particular to support youth events in all parts of the world. Plans were discussed for ways to help emerging sailing nations to develop resources and infrastructure in the sport of sailing.

As we approach the 50-year anniversary of the Laser Class, there are plans to review the ILCA Constitution and see what changes might help improve governance for the next 50 years. This will involve first reviewing in detail the current Constitution followed by proposed changes and then a member review period culminating in a full membership vote. A subcommittee is being formed to begin the first step in this process and the plan is to allow and involve significant external and expert input.

The World Council also conducted a future planning session where some time was spent discussing the long-term future of the class. The common theme in the discussions was the importance of maintaining and developing the grassroots of our class and the critical role of club and fleet level sailing towards continued long-term success. Another common theme was the importance of keeping our sport enjoyable for sailors at all skill levels and providing opportunities to participate in class events, whether it is informal club level events, school programs, Masters competitions, National, Regional and World championships, or even the Olympic games.