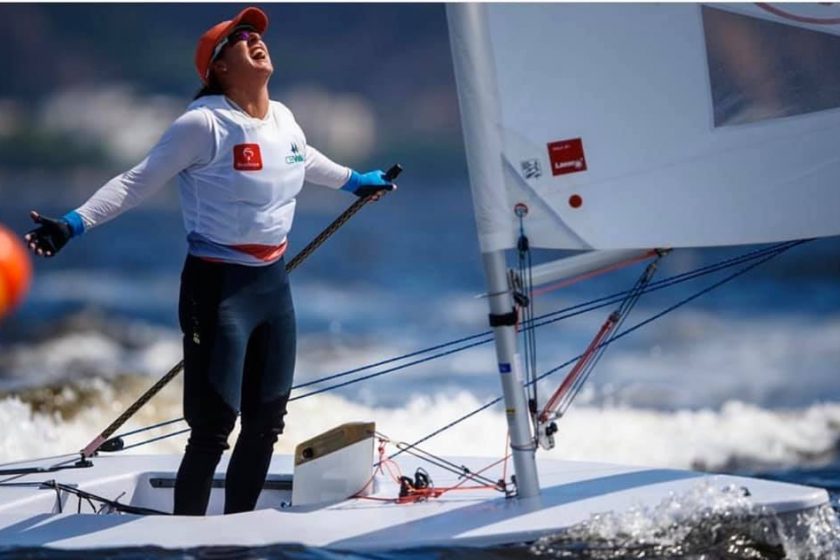 How did you get involved with sailing? I first started in December 1996 when I asked my mom to sign me up for the sailing summer course at the club. My family had just joined the Regatas Lima Club and I saw the Optis at the beach. By then, I was almost 10 years old and I practiced gymnastics representing my school. No one in my family had ever sailed before me.

Why did you first decide to sail the Laser Radial? And what has kept you sailing it since? I retired from Optis at 14 years old and had one complete year without sailing. My former coach came back to Peru from working as coach in Ecuador and Singapore, and looked for and said, “Paloma, let’s sail the Laser!” We didn’t have anything – no boat, no sails, nothing. We borrowed one very old hull from a former sailor, then some very old sails, and we went sailing. At the beginning it was a real struggle. The boat was a disaster, it leaked tons of water, the sail had no shape at all. It looked more like sheets than a sail. Little by little we managed to have better materials and then older sailors who had already retired from the Laser came back to sailing and sailed with us so we finally had a team! That was around 2002–2003.

In 2004 the Laser Radial was announced as the Olympic single-handed class for women and that really motivated me and pushed me harder to dream for the Olympic Games. By then, there was no other choice in Peru if you wanted to make it the Olympics in sailing. Either Laser or Laser Radial, so it was a very easy choice!

What was your first international Laser regatta and first international Laser podium? In 2004 I went to Sao Sebastiao, Brasil, next to Ilhabela, for the Laser (4.7, Radial, and Standard, but I sailed 4.7) South American Championship. Robert Scheidt and Gustavo Lima were there, who had recently beaten Robert at the Worlds in Cadiz 2003. Diego Romero was also there, and many other amazing sailors who I looked up as big sailing stars back then!

My first Laser podium was in 2005 at the 4.7 Laser South American Champs in Paracas, one of the best places to sail in the world!

When you were getting involved in sailing the Laser Radial, were there any specific sailors you looked up to or strived to be like some day? I remember reading about Cecilia Carranza back in 2002–2003. She had good results at the Youth Championships and I remember thinking “if she can, why couldn’t I?” Then I met her and we used to train and became very good friends!

Do you train with many other Laser Radial sailors in Peru? Unfortunately the fleet in Peru is small. We only sail in the main city Lima, and in Paracas – despite having a huge coast line (3000 km of Pacific Ocean). I hope more kids from Optis will keep sailing the Laser.

Describe your first experience with the Olympic Games in Beijing 2008. Were you content with your results? The goal was being there. It was a dream come true. I lost the Olympic spot by a few boats in 2008 Radial Worlds, but I got a wild card. Then for London 2012 the goal was qualifying on the water. That was the first time a Peruvian sailor (woman or man) qualified for the Olympics!

You are a three-time Olympian, also competing in London and Rio. How did those two Olympic experiences compare to Beijing? How has your performance changed? Every experience has been so different from each other. London was very hard for me since I’m very short and it’s very difficult for me to gain weight, so I was struggling with the wind every day. Rio was better, but I wish I could finish some places ahead. This time for Tokyo, I hope I can prepare myself much better and make it to the medal race. I know it’s a big goal but I also know I can achieve it working hard!

Last week you claimed the title at the Copa Brasil in Rio, which qualified Peru for yet another Olympic Games next year. Tell us about that regatta! I went to Rio a bit nervous. Rio is a very complex race course, I raced many times before, but never managed to understand really the current. This time I finally understood it much better!

The first day I went home winning the day by two points. I felt very fast. But I also knew I was racing against Gabriela Kidd who was in home waters. After the second and third day I went home sitting on 2nd place, but feeling I was still in the fight. In one race I was 7th (out of 8) at the top mark. I managed to recover distance in the reaching and downwind, and for the second upwind I went from 5th to 2nd in one wind shift. I went home sitting on 2nd place overall but knowing that the recovery had been crucial. The 4th day of racing I managed to win both races sailed, and for the medal race Gabriela Kidd and I were tied, so the one that won the medal race would win the regatta. We went into a match race at the last two minutes to start and I managed to win the start and control the race. I crossed the finish line completely thrilled for what I just had accomplished.

Explain how you felt when you realized you qualified Peru for Tokyo. Beyond amazing. It has been some hard last months for me. I never imagined I was going to race in four Olympic Games when I first started.

In such a strong fleet of Radial sailors, how do you work at reducing mistakes or minimizing their impact? I work hard at the gym trying to gain weight. When racing, I think I am very fast, I manage to have very good speed in light winds until 12 knots. When there is more wind, I try to adjust the technique upwind. For sure I have to work more on the boat than the girls who have the proper weight!

You are one of the more experienced sailors in the fleet – how do you think that helps or hinders your sailing? I think having experience is a big tool to anticipate many emotions before a big regatta. Knowing what to expect about a big event allows you to focus on what really matters in order to perform at your best at that moment. Knowing what to be most concerned about. That is what I feel experience has given me the most.

What has been the most difficult regatta for you and why? Miami World Cup 2016. Olympic Qualification for Rio 2016. I couldn’t pay the entry fee in time and I was out of the event until two days before racing. I still don’t know how I managed to stay calm and positive, actually I wasn’t very calm. But once I was confirmed to race, all the uncertainty transformed into courage and qualified for the Olympics. 2015 was by far my worst year ever, not making any gold fleet at any regatta.

Do you think you’ll work toward a fifth Olympic campaign or will Tokyo be your last? I once said Rio 2016 was going to be my last Olympics and now I going to Tokyo 2020 so… we will find out after Tokyo!

Do you have any other goals outside of sailing? I have some projects in mind but related to sailing. I love sailing and I love sports and I hope I can stay around after my own sailing career.

What do you enjoy doing when you need a break from sailing? I recently discovered I enjoy very much going out for a bike ride. In Lima it’s quite dangerous biking, but in Paracas it’s perfect to go ride the desert. I also enjoy cooking a lot.

What is your favorite place that you have traveled to because of sailing? Probably Mallorca and for sure Paracas.

What would you like readers to know about Paloma Schmidt Gutiérrez as a person? I am passionate about what I do. I am very persistent and also a bit impatient for some things.