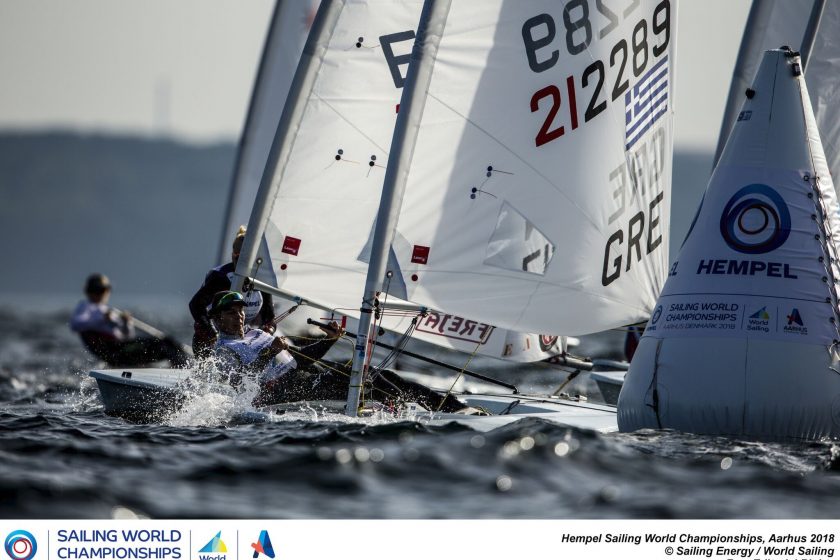 The top mark is a hot spot for rule infringements.

While most of the yelling and bumping rarely results in a penalty turn (even with a jury present), care needs to be taken because the consequences of a penalty turn or two during a chaotic rounding situation can be a massive distance penalty.

The rules: Rule 18.2 provides ”When boats are overlapped the outside boat shall give the inside boat mark-room”.

Importantly, Rule 18.1 provides, among other things, that the above does not apply “between boats on opposite tacks when the proper course at the mark for one but not both of them is to tack,“ so an approaching port boat has no rights over an approaching starboard boat.

Rule 18.3 states ”If a boat in the zone of a mark to be left to port passes head-to-wind from port to starboard tack and is then fetching the mark, she shall not cause a boat that has been on starboard tack since entering the zone to sail above close-hauled to avoid contact and she shall give mark-room if that boat becomes overlapped inside her.”

The practical application: The most common cause of infringement is a port boat that tacks inside the zone. There is huge risk for that boat.

But even this has risk for the port boat, because the definition of close-hauled can be ambiguous, with several degrees of angle difference applicable, depending on weight of the crew, wind strength, chop conditions, and personal preferences as to what produces the best VMG within the concept of proper course.

So, a port tacker inside the zone is very vulnerable under the rules, and it is generally not ideal to be in this position. However, in big fleets if you find yourself mid-fleet, coming in on port can produce net gains. But you must be prepared to duck several starboard boats as necessary and then to continue on port until you are overlaid before attempting to tack onto starboard. Only then can you be sure you have not infringed.

Brett Beyer is preparing a series of “Rule of the Month” articles for Double Bay Sailing Club’s newsletter and has generously agreed to allow re-publication by ILCA.

Brett Beyer is a renowned ILCA-class sailor, having won a record 13 World Championship titles. He is a highly demanded coach for both Olympic and masters sailors. He is based on Sydney Harbour, with numerous coaching assignments globally.  His contributions to the sport and the class have been recognised with life membership of his district Laser Class Association.

Double Bay Sailing Club is one of the pre-eminent ILCA-class sailing clubs in the world, with fleets of 50+ boats in its weekly races.  It has an active and social membership, including both champion and recreational sailors.  It delivers a range of training programs, including several recurrent Brett Beyer coaching programs. The club welcomes new members and visiting sailors. Visit www.dbsc.com.au