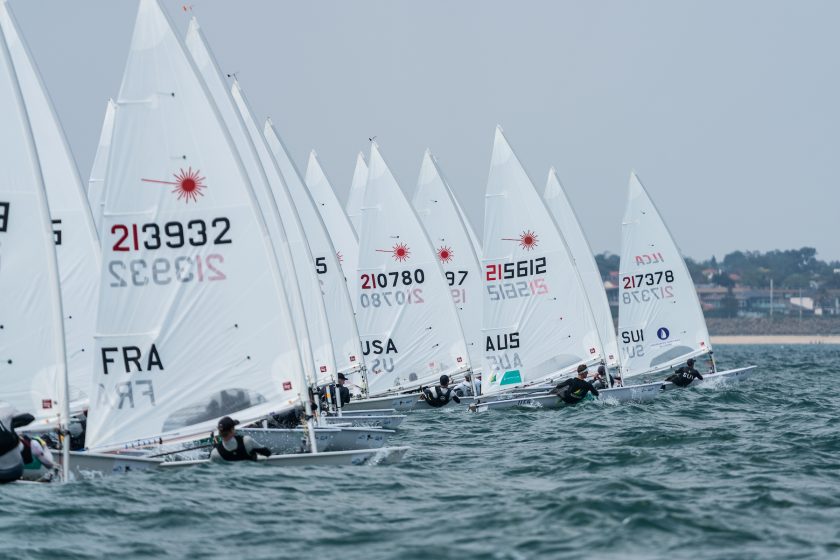 (Sandringham Yacht Club, Australia) Port Phillip delivered another cracking day for the second day of racing at the 2020 edition of Sail Melbourne International. Following a very windy day one, Saturday started out with light conditions before the wind picked up again making for a fitness as well as skill focussed day.

On Friday, only one race had been possible in most fleets and Saturday’s aim was to get the maximum number of races in. With three and more races on the schedule, leader boards started to take shape.

The Laser, sailing out of Sandringham Yacht Club, make up the biggest fleets of Sail Melbourne International with the world’s best sailors using the event as a warm-up for the Laser Standard and Laser Radial worlds in February.

Matt Wearn, who has already been selected to represent Australia at the Tokyo 2020 Olympic Games, did not have the best start to the day posting a 24th in race one, but followed up with the race win to conclude the day with an 11th place. After four races Wearn now sits in fifth place overall.

“It was an interesting day a bit effected by the weather systems going through at the moment but a pretty average day for myself to be honest. I did come back with a first in the second race but couldn’t replicate that in the third, so I think I made a pretty big come back to get somewhere near the top ten in the last one. So it was a pretty average day for me but let’s hope the next half of the regatta is a lot better,” Wearn said.

“I did a good regatta since yesterday, it is pretty windy and sunny so it’s perfect with good conditions. Today the conditions increased all day and with the three races I am a bit tired now. I have previously been to Perth, but this is my first time sailing here in Melbourne and I like Australia,” Bernaz said about the venue, who posted a ninth, fourth and second to retain the lead.

Following his second place on day one, Tom Burton continued with two top five finishes and a 17th on Saturday.

“It was an ok day, bit of a fitness day with three races. We left in light wind and it ended up pretty windy. I think I got two good ones and an average one but my expectations aren’t too high so we will see where we end up at the end of the week,” Tom Burton said.

Third ranked female in the Radial is Rio Olympian Silvia Zennaro, who is ranked sixth overall after posting a 2, 8, 3 on day two and is excited about racing in Melbourne.

“It was another windy day, but I like windy so it was a really good day. I am here for one month, it is like home and I enjoy every day with the amazing conditions,” Zennaro said.

Western Australian Zoe Thomson is currently the top ranked Australian female in the Radial and posted an 8-12-5 series on the second day of the event.

“It has been pretty good, we’ve had fresh conditions so far with some good waves and I’m pretty keen to keep smashing them out of the next few days. Compared to home (WA) it is little more inconsistent here with the sunshine and the wind so not too sure what to expect tomorrow but that’s okay,” Thomson said about the conditions.

The overall Laser Radial fleet is led by Michael Compton (WA), who continues to impress after winning the Australian Youth Championships and being selected on to the 2020 Australian Sailing Youth Team. Compton so far has won two out of the four races (1, 7, 2, 1).