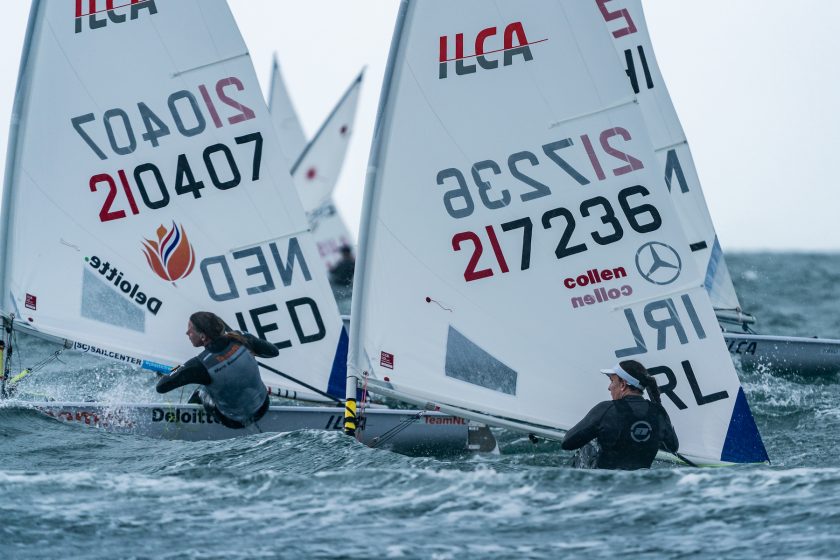 (Sandringham Yacht Club) It was a challenging day for sailors and race management alike with multiple storm fronts passing through Melbourne on the penultimate day of Sail Melbourne International making for another wild and fun day for the majority of the classes.

Despite the weather challenges several of the fleets managed to get all races in, while some were cancelled for the day due to high winds and sea stage.

Tuesday will be the final day of Sail Melbourne International 2020 with another two races scheduled in most classes from 12PM.

Three races were scheduled across the Laser classes on Monday, but only the Laser Radial Gold and Silver fleets managed to get two races in. The Laser Standard fleet completed one race, while the Laser 4.7 were cancelled for the day.

After concluding the qualifying round on Sunday, the fleet split up into gold and silver fleets and with two races on the scoreboard at the end of the day, there was a bit of movement on the leader board.

Youth sailor Stefan Elliott-Shircore from Western Australia took over the overall lead of the fleet after winning both races of the day with his training partner, Australian Youth Team sailor and previous leader Michael Compton (WA) dropping into third (3, 5).

Dutch Olympic champion in the Laser Radial Marit Bouwmeester goes into the final day of Sail Melbourne as the leader of the women after posting a second and third and dropping Sunday’s black-flagged race.

Olympic silver medallist Annalise Murphy continued to move up the ranks and into second place of the women’s after posting a third and a fourth place. Italy’s Silvia Zennaro is ranked third.

“I had a pretty good day today with a third in the first race and a fourth in the second race. It was really windy, hard conditions and I was happy enough with my consistency but a bit annoyed as well because I lost a few places around the course in both races. I didn’t make any major mistakes so I was happy in the end,” Annalise Murphy said.

Dual Olympian Murphy only returned to the Radial last year, after a stint in the Volvo Ocean Race as well as in the skiff and has her eyes once again set on an Olympic medal at Tokyo 2020.

“I’ve had an unconventional four-year cycle in this campaign, I did two full four year campaigns in the Laser Radial for London and Rio and I really needed a break and do something different after the Rio Olympics so I ended up doing the Volvo Ocean Race on “Turn the Tide of Plastic” and then I decided I wanted to sail a 49erFX which I did for 14 months. But I stopped after the Olympic Test Event last year to get back into the Radial to see if I could have a shot at getting another medal,” Murphy said about her Olympic campaign.

“I’ve been to Melbourne quite a few times but the last time I did Sail Melbourne was 2011 just before the Worlds in Perth so it’s great to be back.  It’s been very windy this week and I think this is the windiest regatta I have done in a long time. But it’s definitely good for me to be thrown out of my comfort zone because I haven’t sailed a boat in a long time and it’s a great preparation for the worlds in a month’s time.”

Australian Sailing Squad’s Mara Stransky goes into the final day as the highest ranked Australian female in overall 13th and tenth female after posting a ninth place on Monday.

“It was pretty wild, pretty windy, big waves and I had a bit on keeping up with the bigger guys and girls but I’m fairly happy with my day overall,” Stransky said.

Two races are scheduled in the Laser Radial for the final day of Sail Melbourne on Tuesday.

The Laser Standard once again only got one race in with three-time Olympian Jean-Baptist Bernaz continuing to lead the fleet ahead of the final day of racing.

Australian Sailing Team’s Matt Wearn held on to his second place after a fourth place, while Britain’s Elliot Hansen moved up into third after winning Monday’s race.

“It was another keeper today which was good,” Matt Wearn said, who has already been selected to represent Australia at the Tokyo 2020 Olympic Games in the Laser.

“It was a pretty rainy kind of day so it was nice to take a fourth place out of the single race we got in. Bit of a shame we couldn’t stay out for another one, but that’s laser sailing,” Wearn added.

“My start wasn’t too bad, luckily we didn’t have as many general recalls as yesterday so we got away after the third start and I had a pretty clean one. It’s always nice here when the wind picks up and you get this south westerly with the nice, rolling waves so we had some enjoyable rides downwind and it was good fun,” Wearn said about the racing.

“I think I’m a couple of points behind first going in to tomorrow and the points are pretty close behind me as well so hopefully we get three races in and get some good racing.”

“Today was quite hard with a lot of strong winds, really, a lot. It was fun but quite challenging and it was raining a lot in the second upwind so it was a bit difficult to see at times with the quite strong winds,” Tomasgaard described the challenging conditions.

Like many of the international Laser sailors Tomasgaard has been spending quite a long time in Australia already to escape the European winter as well as to prepare for the 2020 ILCA Standard Men’s World Championships to take place at Sandringham Yacht Club 9-16 February 2020.

“We have been training here already in November and December, so yeah, I’ve been staying here for over two months already,” Tomasgaard said.

“It was another big day and it was a tough one for me. I’m just struggling with a bit of speed off the line but I’m in good positions off the line. I’m just lacking a bit of punch and definitely getting the fitness in with the racing here,” Tom Burton said

After only three races were completed on Sunday, another nine races are scheduled for the final day of the regatta which will wrap up on Tuesday.

Over 300 competitors from 25 countries are competing at Sail Melbourne International with racing to continue on Tuesday for the fifth and final day of the day of the event and with racing scheduled to commence from 12PM at Sandringham Yacht Club.