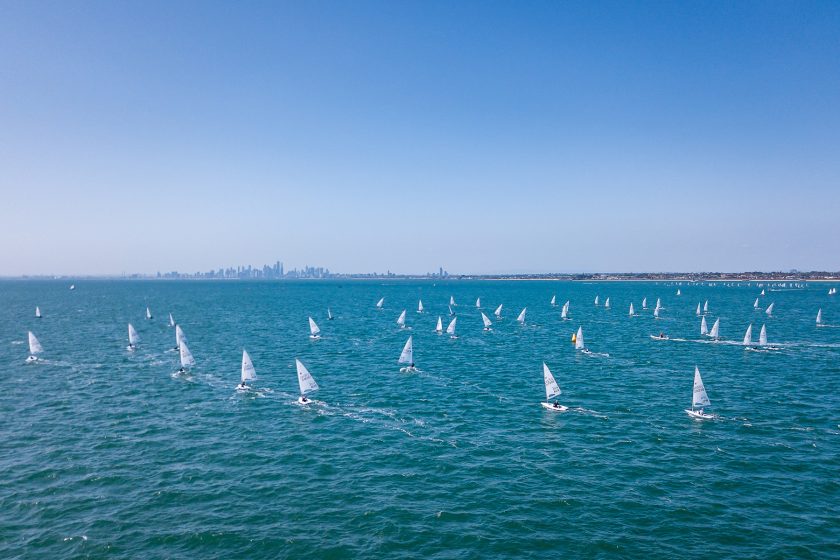 Over 300 competitors from 25 countries contested Melbourne’s premier event for Olympic and Invited class sailing, which is part of Melbourne’s Summer of Sailing 2020 series.

The event was used by many sailors as a warm-up regatta for the next round of World Championship events held around the bay in February with everyone experiencing a whole range of sailing conditions on Port Phillip.

The light winds on the final day resulted in a long wait for the Laser, but in the end, all fleets managed to get one final race on the scoreboard.

A third place in the one and only race of the day was enough for three-time Olympian Jean-Baptist Bernaz from France to take home the overall win at his first Sail Melbourne event.

“We had a little wait on shore today but then got one race in. It was my first time here and it was really great to sail here. It was a good week and I’m happy to win,” Bernaz said.

Australian Sailing Team’s Matt Wearn, who has already been selected to represent Australia at the Tokyo 2020 Games, posted a fifth to finish the regatta four points behind Bernaz in overall second. Australian Sailing Squad’s Luke Elliott jumped from sixth into third place.

With the event ranked as the 2020 Laser Oceania Championships, Wearn won the Oceania Champion title with Luke Elliott following in second and New Zealand’s Thomas Saunders in third.

“It has been a pretty good regatta. It has been pretty breezy in some testing conditions so it was nice to stretch your legs a little bit and do some hiking on the last day,” Matt Wearn said.

“We have had a great competition here with nearly 70 boats and pretty high quality as well so I’m happy with where I am standing at the moment. There’s obviously still a lot of stuff I need to polish off on, a few things in the starts and things I’m not really doing a 100% right so hopefully between this and the Worlds I can polish it all off and be good to go in February for the world championships,” Wearn added with the upcoming world championships in mind.

Two-time Olympian and former world champion Rutger van Schaardenburg from the Netherlands won the final race of the regatta and finished 15th overall.

Olympic champion Marit Bouwmeester from the Netherlands took home the win in the women’s Laser Radial and held on to her lead with an eleventh place in the last race.Louise Cervera from France was the winner of the final race and finished in 25th overall.

Following a consistent regatta, including two race wins in the eight-race series and dropping Sunday’s black-flagged race, Bouwmeester was happy with her pre-worlds event that saw her finish six points ahead of second-placed Olympic silver medallist Annalise Murphy (IRL).

“It has been really good! We have been here for Nationals and now Sail Melbourne and I think the organisation is doing a great job and there are so many volunteers, which is great,” Bouwmeester said about Sail Melbourne.

“Whilst this event has been completely different to the Nationals, it was nice to experience some different conditions,” Bouwmeester added after already contesting the Australian Laser Nationals at the start of January.

“It has been challenging with the wind, it has been a lot of fun and it has also been fun racing against the young boys who make us work hard so that’s been really good,” Bouwmeester added about the men’s Laser Radial sailing in the same fleet and with Western Australian youth sailors Stefan Elliot-Shircore and Michael Compton finishing the event in first and third respectively.

“This regatta is obviously very competitive, there are a lot of good girls over here so it’s really great to be able to race against them and a really cool opportunity to be racing against Olympic medallists,” Stefan Elliot–Shircore said.

“All but one were stormy windy days, but I like these conditions, they are not like Italy where it is sunny and light winds. I prefer strong winds so I like it here in Australia and I also expect a week of wind for the worlds, which makes it a bit easier for me for our trials. For our selection the worlds will be the most important regatta for me and I want to do my best performance at the worlds,” Zennaro said with Italian team selection on her mind.

Australian Sailing Squad’s Mara Stransky (QLD) finished Sail Melbourne as the highest ranked Australian female in ninth in the women’s ranking and overall 12th in the mixed-fleet after posting an eighth on Tuesday. As the top ranked women’s Laser Radial sailor from Oceania she took home the Oceania champion title.

“It was a nice change to not have so much wind on the last day and something a little different that’s not super windy. It has been a really good week to identify a few things to work on before the worlds and I’m looking forward to it,” Stransky said.

Over 300 competitors from 25 countries competed at Sail Melbourne 202 over five days with the event hosted by Royal Brighton Yacht Club as well as Sandringham Yacht Club (Laser fleets).