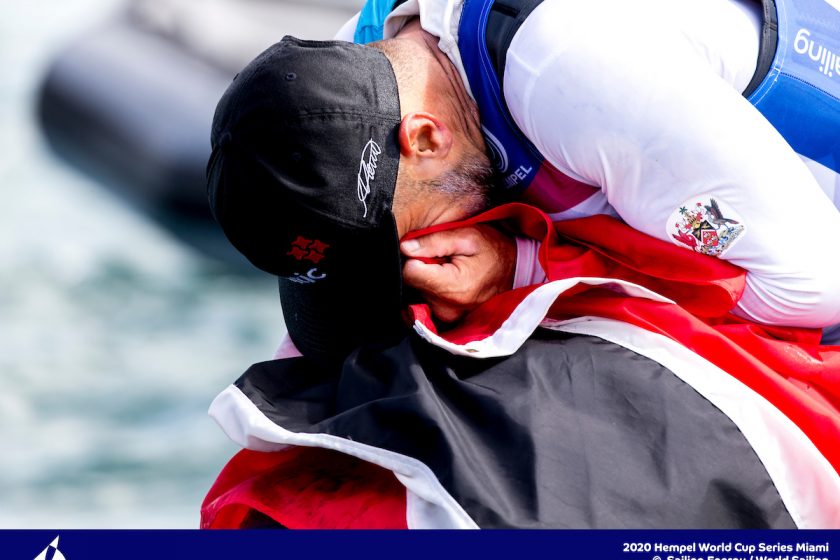 Sailors from around the globe convened in South Florida last week with North American Olympic qualification at stake with the Tokyo 2020 Games only six months away.

Hempel World Cup Series Miami was the final opportunity for North American nations to qualify for the Tokyo 2020 Olympic Games in the Laser and Laser Radial fleets. A fight was on in the Laser between a hard-chasing Canadian pack and Trinidad and Tobago’s Andrew Lewis with the latter prevailing in dramatic circumstances.

Stefano Peschiera of Peru jumped from second to first with his win in the medal race to take the gold medal in the talented Laser class. Argentina’s Francisco Garagna Rigonat dropped to second place to earn the silver medal and Enrique Jose Arathoon Pacas of El Salvador took the bronze. Meanwhile there was an emotional battle for as he booked his place at Tokyo 2020.

“I couldn’t do any type of match race or any complicated strategy to try and get the guy in first to have a bad race,” said Peschiera, the gold medalist. “I had to focus on my own race. All I could do was make him nervous at the start and that was about it. All I had to do was put two boats between the guy in first and not let the guy in third finish five boats ahead of me, so that was a bigger gap. That’s what ended up happening.”

Lewis, a two-time Olympian, held the advantage heading into the medal race for the Tokyo 2020 North American spot and after a penalty it looked like his chance to qualify slipped away. However a race abandonment gave him a second chance and a better understanding of how his rivals would face off against him. In an up-and-down race he placed fourth which saw him finish fourth overall, ahead of the Canadians, to book his ticket to Tokyo.

“Olympics number three – here I come – amazing,” said Lewis after the race. “It was hard out there. Five Canadians in the medal race. I don’t think I’ve ever seen a medal race with that many sailors from one nation. Five of them were trying to prevent me from getting one position. Three of them could overtake and at one point during the race one of them had it. One went left, one went right, one nearly won the race. I wanted to push for the bronze medal but in that position, I didn’t want to take the risk.”

“I’m really happy for my training partner from El Salvador to win the bronze,” he added. “I was able to protect against the two Canadians behind me and catch the one in front. If I’m not mistaken, for half the race the Canadian had the spot as he was in first and I was sixth or seventh.

“I kept telling myself, ‘Andrew, stay calm and go, stay calm and go.’ I was catching the one in front and the ones behind were catching me. What a nerve, huh. I’ve been fighting for this since 2018 in Aarhus and thanks to the Lord, this is a special one.”

American Laser Radial athlete, Erika Reineke put the finishing touches on her gold-medal performance today. She was fifth in the medal race to win the regatta by six points over Vasileia Karachaliou of Greece. Reineke had a narrow two point lead over Karachaliou and Italy’s Matilda Talluri entering today’s finale. The race featured several penalties, including one on Karachaliou on the final downwind. Karachaliou gets the silver medal, while India’s Nethra Kumanan took the bronze after winning the medal race.

“Off the start I felt really good,” said Reineke. “I tacked and I was at the front of the race and then I messed up one shift and my competitors split from me. Vasileia played the first beat extremely well and I tried to keep my head in the game and not give up. On the last downwind I covered her and unfortunately she got a flag, but that’s the sport. I had to beat her [Vasileia] in the race and the Italian [Talluri] was also very close so I just went out trying to win the race.”

Reineke was ecstatic to win her first race of 2020. “It feels really good. I’m still trying to get my head around it, but it feels great. The nerves got to me during the race. I dropped my tiller extension during the race, and I had bad mark roundings, but now it’s great. I couldn’t have done it without Steve [Mitchell], my team and support.”