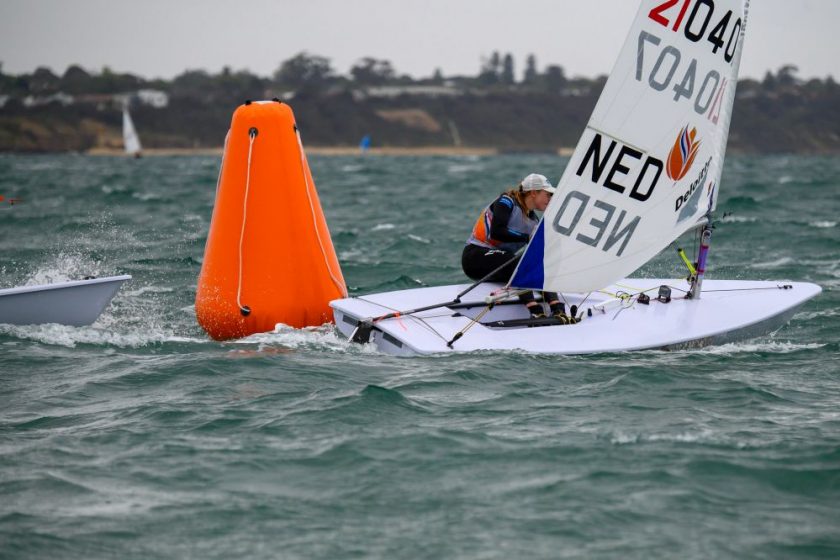 All three medalists from the Rio Olympics will take to the water from Sandringham Yacht Club to compete in the Laser Radial Women’s Championship, which starts on Sunday. They head a star-studded field of 106 competitors from 40 countries, many of whom will be trying to qualify as their country’s representative at this year’s Olympic Games in Tokyo.

Leading the charge will be Marit Bouwmeester from the Netherlands, the 2016 Gold and 2012 Silver medalist at the Olympics, and a six-time World Champion in the event. Marit has been training in Melbourne since December and won the Australian Championship in early January. Although she has already been selected for the Olympics by the Dutch Federation, she will still have a battle on her hands during the Worlds from countrywomen Mirthe Akkerman, Maxim Jonker and Daphne van der Vaart, who all pushed her during the Australian Championship.

Anne-Marie Rindom (DEN) is ranked number one in the world at present and is the defending world champion, having also won the title in 2015. She was 13th at the London Olympics (2012) and won the bronze medal in Rio (2016).

Annalise Murphy (IRE) was part of an epic Laser Radial medal race at the London Olympics, where she missed out on the Bronze by the barest of margins. She made up for that at Rio, taking Silver behind Marit Bouwmeester.

Another former world champion, Alison Young of Great Britain, is currently ranked second in the world, and Emma Plasschart of Belgium is ranked third.

Competing to represent Finland in the Olympics are Tuula Tenkinen and Monika Mikkola, ranked ninth and 14th, respectively. Even more intense will be the rivalry for Kim and Lin Pletikos of Slovenia, who are not only competing for an Olympic spot, but for bragging rights around the family dinner table.

The home crowd is also hoping to see a sailor selected for Tokyo. Western Australian Zoe Thomson qualified the country for the Olympics at the test event in Enoshima, the Olympic venue, but she will come under intense pressure from Queenslander Mara Stransky, who dominated the Australian Championships, finishing in fourth place behind three Dutch sailors and over 100 points ahead of her teammate. Both sailors suffered a black flag disqualification at the Australian Championships and will be hoping to sail “clean” at this event.

There are 19 Australians in the field for the Worlds. Assuming there are no upsets, either Thomson or Stransky will need to finish in the top 10 to secure a seat on the plane to Tokyo.

Sandringham Yacht Club was a hive of activity on Friday as sailors finished registration and the late-comers took possession of the supplied boats and sails that they will use for the duration of the championship.

There is a practice race scheduled for Saturday, but most sailors will choose to train in their squads instead of competing. The championship is scheduled to start at 2pm on Sunday, with two races per day for six days, finishing on Friday February 28th.

The forecast for the first day of racing is currently for very light and variable winds, which will make it almost impossible for the race committee to get even one race completed. However, this is Melbourne, where conditions can change by the hour. The sailors who have been here training in strong southerlies for the past two months will be hoping that it does.