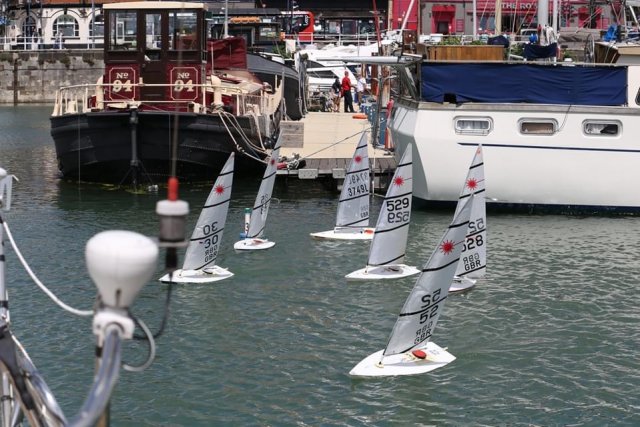 With the current restrictions on competitive sailing restricting yachts to only two members of the same household and the weekend weather not being conducive to two-handed sailing, members of the Royal Temple Yacht Club have had to turn to other means to get their sailing fix.

Enter RC Lasers—or remote-controlled Lasers. A quarter the size of a normal Laser dinghy, they are a great way for competitive sailors to hone their skills from the socially distanced safety of the pontoon.

The full-size Laser dinghy was designed by Bruce Kirby and is by far the most popular dinghy sailed in 40 countries around the world. In 1995 Jon Elmaleh, a past world champion of the Radio-Controlled Marblehead class, approached Bruce with the idea of making a 1/4-scale version of the Laser for radio-controlled racing. The strict one design means that all of the Lasers are identical so you have to rely purely on skill to win a race.

10 members of the Royal Temple Yacht Club met at the inner harbour in Ramsgate this morning, two of whom had never raced a remote-controlled Laser before. They were also joined by a man who was very skilled, club member Adrian Tomlinson who has previously come second in the National Championships and third in the Worlds. Tomlinson provided the buoys and the starting clock and the competition started with new Rear Comm. Sail Nick Rawbone keeping an eye on the proceedings. With lockdown meaning that the racing season hasn’t yet got underway, it’s been left to Rawbone to come up with new ways to entertain the sailors.

The weather tried its hardest to knock the Lasers down with very blustery conditions, the wind gusted up to 20 knots and was constantly shifting making conditions difficult. The group had to give their full attention to their yachts but thankfully there wasn’t a repeat of a previous incident when one competitor was concentrating so hard that he stepped off the end of the pontoon into the water! Sixteen races later and Tomlinson proved once again to be a winner, but it was tightly contested for second and third place. Finally Paul Woodward, skipper of yacht Stiletto and Euromarine Insurance Ramsgate Week 2019 Championship winner took second place, and Mike Brand—owner of yacht Foxy, Gold Cup winner in last years Euromarine Insurance Ramsgate Week, a full-size yacht regatta—took third place.

Due to the weather, this took place on a Sunday this week but it’s hoped that they will race every Saturday at 11AM. — Karen Cox Chair of Euromarine Insurance Ramsgate Week.