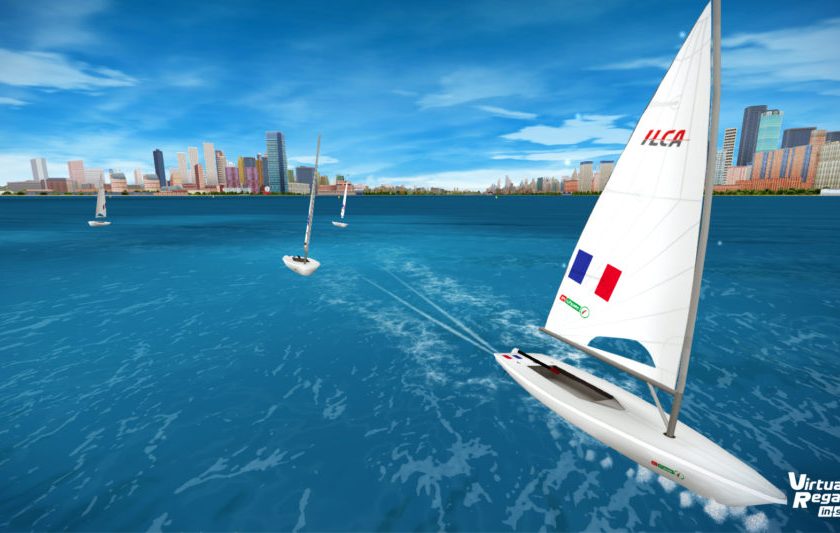 During the online Kieler Woche event in June 2020, players were able to race in the Laser dinghy on Virtual Regatta Inshore for the first time.

9,471 unique players tested out the virtual version of the Laser, with 1,808 races (featuring 25 boats per race) completed.

The famous Olympic dinghy is the world’s most popular boat, with over 200,000 in circulation across the globe.

But what did the sailors think of its introduction into the eSailing world?

We asked some real-life sailors for their verdict on Virtual Regatta’s Laser:

Martim Fernandes (POR):
“I’ve played Virtual Regatta for a year and I think the Laser is a fun boat to sail virtually. It has a lot of tricks that we can develop as eSailors in order to be faster. The Laser is not like any other VR boat, it has a different way of sailing which makes the boat unique. In the upwind you can gain a lot pumping, by bearing away to get speed and then pressing the best VMG button. I personally like this technique, although it doesn’t really compare to sailing a Laser in real life. The downwind is similar as sailing a Star on the game, but a little bit faster. There’s the problem of getting away from the wind shadows from the boats behind, which is very similar to real-life Laser sailing.

“My first time trying the Laser on Virtual Regatta wasn’t as successful as I thought it would be, but I learned the tricks by making mistakes and in the end I improved a lot. It’s very hard to compare my eSailing and real-life results, because in real life we have a lot more factors to consider, but I did slightly better in eSailing; I managed to achieve some top-five finishes, including some first places.

“I raced against my teammates and fellow friends from eSailing – it sure made the races harder to win. I’m going to continue playing Virtual Regatta, with an eye on the 2020 eSailing World Championship spot.”

Mario Prodigo (ITA):
“I have been playing Virtual Regatta since 2018 and I really liked sailing the Laser; I think it was an excellent upgrade for the game to insert another Olympic class as widespread in the world as the Laser. I think it is a great alternative to fast boats like the Nacra 17 and the 49er. The Laser in speed is similar to the Star, and it is really good to have it within the classes for the World Sailing ranking.

“I started playing Virtual Regatta with my teammates and I continued meeting many sailing friends. I have also raced against many sailors who are very strong in real sailing and it was a little satisfaction to beat them at least in eSailing.

“I’ve been happy with my results on Virtual Regatta in the events organised during lockdown, and I finished second in the Italian Championship last year too. In real life I have also had excellent results since I was a child in various classes – now I am focusing on Laser standard and ORC regattas and, given my young age, I hope to improve a lot. I will continue to play Virtual Regatta as well, and I hope to qualify for the eSailing World Championship.”

Alexandre Kowalski (FRA):
“I started playing Virtual Regatta two years ago. I think it shows the reality of sailing and it’s very nice to sail our boat at home. We don’t have to hike a lot to be at the front, and that’s cool.

“It was fun to sail a virtual Laser. It’s a little bit slower than the other boats going upwind, but when we bear away, the speed can reach up to 12–13 knots.

“I had a good championship and finished 99th overall, but I hope to have a better result in the real event in September.

“I play with some of my French friends and we have a lot of fun challenging each other. I will definitely sail the Laser again in Virtual Regatta.”

Eduardo Marques (POR):
“I have been playing Virtual Regatta since the lockdown and my favorite boat on the game is the J/70. I’ve really enjoyed trying the Laser, although I think it’s one of the most difficult boats to sail. It’s different and challenging; I still need to learn some tricks.

“The main difference to sailing a real Laser is that in real life we gain and lose a lot of places on the downwind, and it’s harder to do that on the game. I’m used to sailing against 60 professional sailors, and on Virtual Regatta I’m really enjoying sailing against friends, teammates and rivals.”