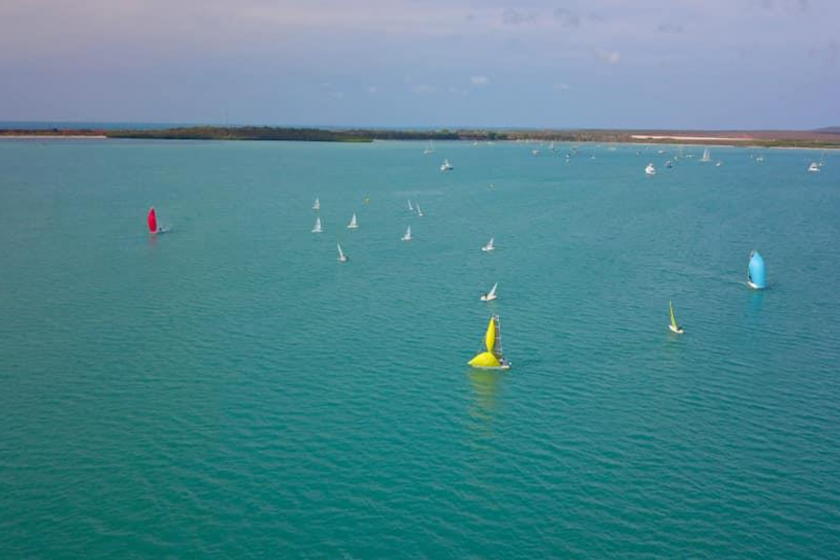 Sometimes sailing adventures just happen and the Gove Sailing Regatta was just such an adventure.  What started as a discussion between sailors at the Dinah Beach Cruising Yacht Association (DBCYA) bar after a wet season race, planted a seed to host a regatta at the Gove Boat Club (GBC). Gove is situated on the Gove Peninsular on the north eastern tip of Arnhem Land on the Gulf of Carpentaria making it one of the most remote sailing clubs in Australia. The Club provides a social and recreational outlet for the small mining town of Nhulunbuy and the surrounding aboriginal settlements.

Getting to Gove is a challenge on its own with either a four or more days’ sail across the top end from Australia, or a two-day, 1,000 km, four-wheel-drive trip over one of the roughest dirt roads through Arnhem Land.  For those who can’t afford the time to sail or drive, there are also a daily flights between Darwin and Nhulunbuy by a local airline that services the mine and town. Accommodation is available in the form of a new camp ground with modern facilities built in the club grounds or hotels in Nhulunbuy.  Most of the sailors and families brought their tents or camper trailers and camped at the club to be close to the action and enjoy the wonderful GBC hospitality. Others stayed in Nhulunbuy for the comfort of hotel dining and a swimming pool for the kids.  As part of the regatta package, the GBC provided very useful information on how to get to Gove and how to arrange permits to travel through Arnhem Land as travel is restricted in Aboriginal Land.

On 13 September, 12 Lasers were packed onto three trailers and transported from the Darwin Sailing Club (DSC) to the Gove via the Sea Swift barge. Sea Swift is a Darwin-based Barge Company, running a regular barge service between Darwin and Gove, and is also major sponsor of the regatta.  Sea Swift provided transport for the Darwin Lasers as part of its generous sponsorship.

The Darwin Lasers added to a Gove fleet of 11 Lasers giving a competitive fleet of 23 Lasers in 4.7, Radial and Standard rigs.  Some of the Darwin sailors chartered the local Lasers to sail in the regatta.

Some fun facts regarding the Laser fleet:

In late September, approximately 100 adults, children, and a few dogs made their way from Darwin by road, sea, or air to Gove to compete in the regatta. The regatta also included a sports boats division, using GBC’s fleet of four Fareast 19Rs. Six teams from Gove and Darwin competing in a round-robin format rotating the crews through the four boats. There was also a cruising division consisting of the keelboats and large multihulls that sailed from Darwin to Gove and included a number of Gove-based boats provided a 13-boat fleet of cruising yachts.

The regatta was sailed on the beautiful waters of Melville Bay in front of the club, an area that is well known for its good fishing and large crocodiles, adding some extra excitement to Laser sailing.  The racing was over three days from 26 to 28 September with the Lasers and the sports boats completing five races each day.  The cruising division sailed longer courses around the harbour and did one race per day.

The Laser and Fareast courses were set as windward-leeward with two laps of the course for each race. To take advantage of the more consistent afternoon breeze, the racing started at 13.30 hrs for the first two days and 12.30 on the third day. Due to the limited timeframe, races were kept short with 15 to 20 minutes for each race. The sports boats started first followed by the Lasers, both fleets sailed on the same course at the same time with the Fareasts having a slightly longer course, having their windward mark set further up the course. The Laser starts were hotly contested with the fleet bunched together as they headed up the first leg of the course only to meet the Fareasts having rounded the top mark heading back down the course under full spinnaker.  This resulted in some unwanted wind shadows and obstructions for the Lasers, but the simple rules were followed to and there were no serious incidents.  The short races proved to be popular for the Laser sailors with all rigs racing together, using the yardstick handicap to determine the final results.  With winds of 15 to 20 knots and shifts of up to 10°, the racing was close and exciting.

After three days of racing with 15 races and two discards, the final results on yardstick saw Holly Ranson (Radial) as the overall winner followed by Aden McGrath (Radial) in second place and Phil Toonson (Standard) in third place.

After the last race on Monday, the visiting Lasers were loaded back onto the trailers ready for the long barge trip back to Darwin.  The next day, most of the sailors who drove to Gove headed back home knowing that they had 675km of rough dirt road ahead of them before seeing any bitumen.  Some of the families opted to stay in the area for a while with permits obtained to explore the beautiful remote beaches the area has to offer.  The return trip was uneventful with everyone making it home safely.  The barge landed in Darwin on 5 October and the trailers were picked up from Sea Swift and returned to the DSC where they were unloaded ready for the DSC Club Championship on 10 and 11 October.

Following the regatta, the GBC hosted a wonderful presentation evening in the clubhouse; this included a sumptuous smorgasbord dinner prepared by the GBC Bistro. Prizes and trophies were awarded to the first three places in each fleet as well as a number of prizes awarded to various sailors for outstanding actions or novelty incidents. The many valued sponsors were recognised and hardworking club members and officials thanked for their wonderful efforts in making the regatta possible. Everyone had a great time and the presentation evening continued on into the night with some hopeful stars taking over of the karaoke system.

The inaugural Gove Regatta was a great success attracting a large number of sailors of all levels.  The Laser fleet of 23 entries was the largest Laser regatta in the NT for some time and the largest ever for Gove.  The regatta was professionally run with excellent race management and top-class facilities.  Many thanks to the Gove community who embraced the opportunity to support the regatta and notch up many firsts – be it starting a race, entering race results, or competitors finishing their first race.  The efforts of Brad Smith, Commodore GBC and Geoff Bridgefoot Laser sail trainer GBC, must be noted as they planned and delivered a wonderful regatta in under 12 months.

The Gove Boat Club is a friendly, top-class venue with a location that is the envy of sailing clubs everywhere. GBC plans on making this an annual event and it is already entered into the race calendar for 2021.  So if you want some great Laser sailing in one of the friendliest and most remote clubs in the Australia, come to Gove in 2021 you won’t regret it.