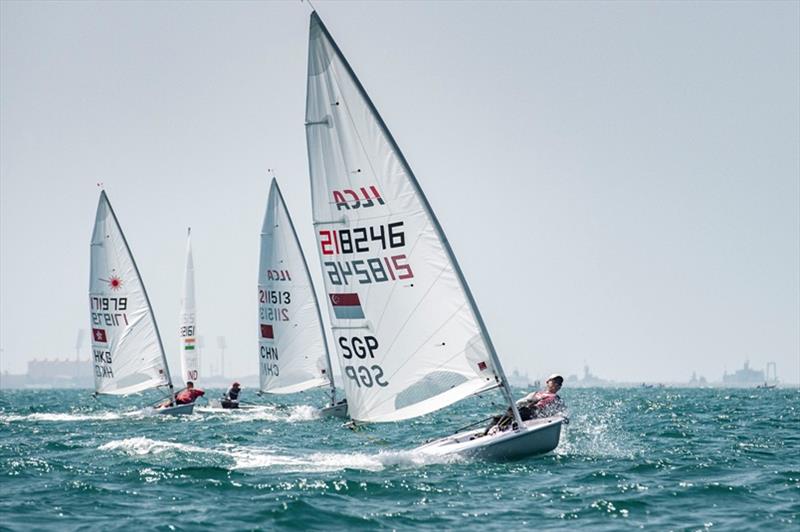 The Mussanah Open Championship, organized by Oman Sail, was the final qualification event where the African and Asian sailors could secure their countries a chance to compete in the Tokyo Olympic Games. After a week of sailing, India’s Nethra Kumanan and Hong Kong’s Stephanie Norton qualified their countries in the ILCA 6 and Singapore’s Ryan Lo along with India’s Vishnu Saravanan qualified in the ILCA 7.

There was tight competition in the ILCA 6 fleet all week, specifically between the top two contenders for gold: Emma Savelon of the Netherlands and Nethra Kumanan. The day concluded with Savelon taking gold just one point ahead of Kumanan. Norton claimed bronze and Korean Kim Jia finished just behind in fourth.

After dominating the ILCA 7 fleet all week, Lo secured his victory with a strong lead. Saravanan finished second in the medal race to claim silver overall, followed by Keerati Bualong of Thailand in third.

At the prize-giving ceremony, CEO of Oman Sail Dr. Khamis Al Jabri said, “You came to Oman with the goal of proudly representing your home country and securing entry to the Tokyo Olympics. Every competitor here rose brilliantly to the challenge and demonstrated outstanding skills and passion for the sport of sailing. We hope that during your stay here, you have enjoyed the warm hospitality of the Omani culture and received all of the support you needed from the Oman Sail team. I look forward to welcoming you back to Oman in the future.”