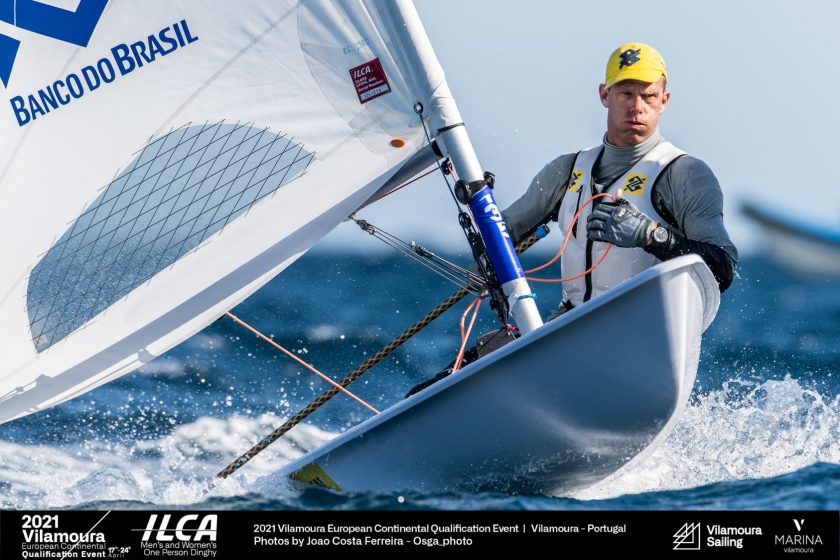 Today the racing kicked off in Vilamoura, Portugal at the ILCA Vilamoura European Continental Qualification. Organized by Vilamoura Sailing, this qualifier event is held for European countries to claim their remaining four slots for the Tokyo Olympic Games: two in the women’s ILCA 6 fleet and two in the men’s ILCA 7 fleet. There are seven countries competing for the two ILCA 6 Olympic tickets, and 17 countries vying for the two ILCA 7 slots.

150 sailors from 34 countries were able to come together for this event, as Vilamoura continues to be one of the few places in the world right now where sailing competitions are open. For many, this regatta represents the last chance to make it to Tokyo.

“Vilamoura Sailing has created unique safety conditions over the last year from the public health point of view, and this has been recognized by national and international entities. The world’s sailing elite have been in Vilamoura, training and participating in European and world events since September 2020,” says Nuno Reis, director of Vilamoura Sailing.

The women’s fleet was split into two fleets, red and green. Each fleet had a consistent leader today where both Vasileia Karachaliou of Greece and Denmark’s Anne-Marie Random got two bullets in their fleets. With two consistent fourth-place finishes today, Marie Barrue of France sits behind them on the leaderboard, just ahead of Japan’s Manami Doi and Israel’s Shay Kakon. See full results here.

The ILCA 7 fleet, also divided into two fleets, is led by the one and only Robert Scheidt of Brazil who finished with two second places today. Russian Maxim Nikolaev sits just one point behind after finishing with a third place and second place in today’s two races. Croatia’s Tonči Stipanović and Peru’s Stefano Peschiera both carry 10 points just ahead of Kaarle Tapper of Finland with 11 points. See full results here.

Racing will continue tomorrow with two more races scheduled. Live streaming of the racing will be available later in the week on April 22–⁠24.