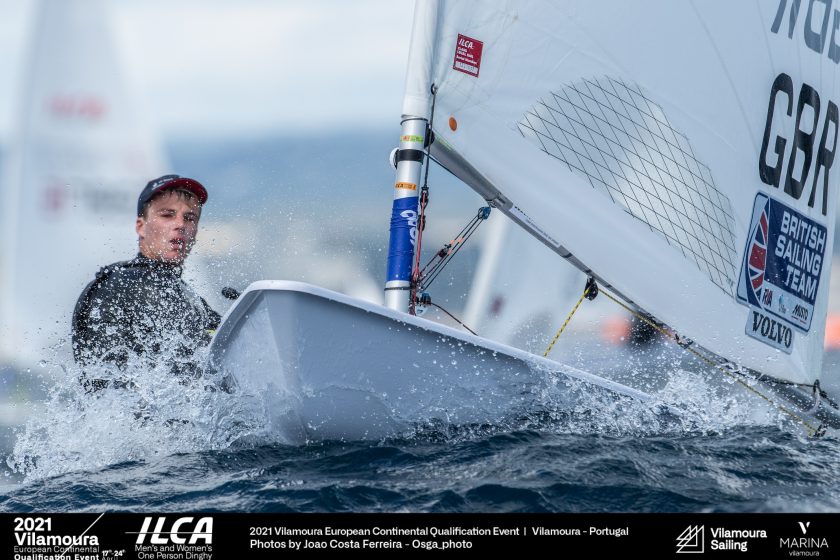 The men’s and women’s fleets were divided into gold and silver fleets today to complete two more races at the European Continental Qualification for Tokyo. Vilamoura Sailing launched live streaming of the event, available through the final two days of racing.

In the men’s fleet, Great Britain’s Michael Beckett has been the most consistent all week, and that has pushed him to the top of the leaderboard after eight races with 24 nett points. Today Beckett finished third in race 7 and second in race 8, exactly the same scores as races 5 and 6 for him. Behind Beckett, Croatian Filip Jurišić sits five points ahead of his teammate Tonči Stipanović. The competition is still fierce in the ILCA 7 fleet with Spain’s Joel Rodriguez Perez and Brazil’s Robert Scheidt only a few points away from the Croatians. See full results here.

In the women’s fleet, the same top two names have held on the ILCA 6 leaderboard after today’s races: Denmark’s Olympian Anne-Marie Rindom maintains first place with 26 nett points, and Marie Barrue of France is still in second overall. Maud Jayet of Switzerland, who finished race 7 in second behind Rindom, has climbed into third place. See full results here.

Tune into LIVE STREAMING April 23 and 24. Two more races scheduled for April 23, with the first possible warning signal at 12:00 GMT+1 for the ILCA 7 gold fleet.