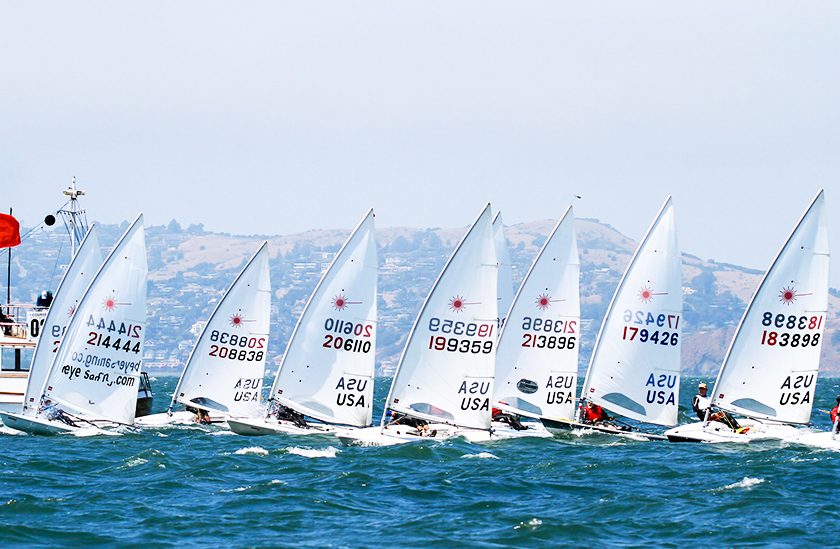 (SAN FRANCISCO, CA) — On July 14–18, 2021, St. Francis Yacht Club will welcome 125 sailors for four days of racing in the ILCA North American Championships on San Francisco Bay. Delayed for a year due to the global pandemic, sailors from all points of the continent plus several nations will be in attendance, competing in ILCA 4 (formerly known as Laser 4.7), ILCA 6 (Laser Radial) and ILCA 7 (Laser Standard) rigs.

“The Club was meant to host this event in 2020 and, obviously, COVID had something to say about that,” said Regatta Chair Tracy Usher, who will also be competing. “The class generously allowed us to reschedule to 2021 and we are really excited to be hosting. We are still a little bit impacted by COVID, with significantly fewer entries from Canada than normal due to ongoing border restrictions, but we do have a multinational event with entries from as far away as Chile.”

“This is the biggest event the St. Francis Yacht Club has hosted in 18 months, and I’m pleased that so many sailors are able to come and compete. This is an iconic boat in an iconic venue and I’m hoping we have classic San Francisco Bay conditions to really test these sailors,” said Adam Corpuz-Lahne, Senior Sailing Director at St. Francis Yacht Club.

Corpuz-Lahne noted that the ILCA squad from the Olympic Development Program will be competing, alongside a number of notable young sailors from the Bay Area and beyond. “The youth movement coming up in this fleet is full of talent and I’m looking forward to seeing them compete against each other and the established veterans.” Youth sailors to watch include Charlotte Rose (Houston Yacht Club), Caleb Yoslov (San Francisco Yacht Club) and Christina Sakellaris while veterans include Andrew Holdsworth, who won the Laser Master North American Championships in 2018, held at St. Francis Yacht Club.

Like any major regatta hosted at St. Francis Yacht Club, the 2021 ILCA NAs will be a full club effort, drawing on support from over a hundred on-water and shoreside volunteers. “Summer on San Francisco Bay is a near-guarantee for challenging conditions, and we are looking forward to showing these sailors a world class regatta experience, with excellent race management and fun on-shore socials,” said St. Francis Yacht Club Commodore Bill Dana. “We’re excited to be back on the water with a fantastic group of Race Committee volunteers including seasoned PRO John Siegel.” With 75 sailors racing in the ILCA 6 class, competition will be intense. Regatta organizers are planning to split the ILCA 6 fleet into two groups for two days of qualifying races, followed by two days of gold and silver fleet racing. The ILCA 4 class has 25 sailors competing and another 25 will race in ILCA 7. Organizers plan to have two fleets on the racecourse at a time and, with first warnings at 1155 on Thursday and then 1055 daily, conduct ten races total for each class.

TO KEEP UP WITH THIS WEEK’S RACING: