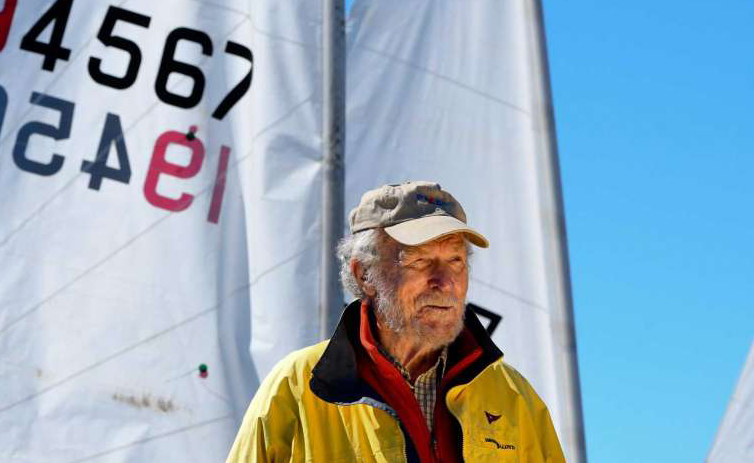 It is with great sadness that the class has learned of the passing of Bruce Kirby on July 18, 2021 at the age of 92. Together with fellow Canadian, Ian Bruce, Kirby designed what was originally called the “Weekender” which then became the “Laser” and now the “ILCA dinghy”. Whatever its name, Bruce Kirby’s simple design became the underpinning of what is now, more than 50 years later, the largest adult and youth sailing class in the world, sailed in more than 150 countries worldwide and a double Olympic class. The boat is such a simple design but clearly one that has survived the test of time. The class extends its deepest sympathies to Bruce’s family.

Bruce was a newspaper man in Ottawa and Montreal before he became a yacht designer. A competitive sailor in International 14 dinghies from age 15, his focus was on making the boats faster. After being beaten in a regatta at Cowes in heavy wind, he drew the Kirby Mark I on a piece of shelf paper. It was fast upwind in a breeze. He sold 30 of the Mark I.

Untrained, Bruce began designing by observing. “I had a copy of Skene’s Elements of Yacht Design. If you can understand 50% of what’s in that book, you can design a boat. Design isn’t brain surgery. We should always pretend that it is, but it’s really not.”

Having made that modest disclaimer, he grants that designing a vessel that is compatible with two disparate elements – air and water – is, in fact, a challenge. There were seven versions of the Kirby International 14 built: 739 boats total. “It was done seat of the pants,” he had explained. “No testing. It was all empirical. Each new boat was a take-off on the old one.”

In 1964, Bruce moved to Finns and made the Canadian Olympic team. He didn’t quit his day job. By the mid-1960s, he had become editor of One Design Yachtsman (now Sailing World). He jumped into a Star boat in 1968, and again represented Canada in the Olympics.

Although globally recognized as the designer of the 13’-10” Laser Olympic sailing dinghy, of which over 215,000 have now been built, his design career includes a multitude of successful classes such as the Sonar, Kirby 25 and Ideal 18, America’s Cup Twelve Meters; production racer/cruisers like the San Juan 24 and 30; offshore racing boats such as the Admiral’s Cup 40’ Runaway; a number of innovative cruising designs; and a variety of plywood Sharpie designs for home construction.