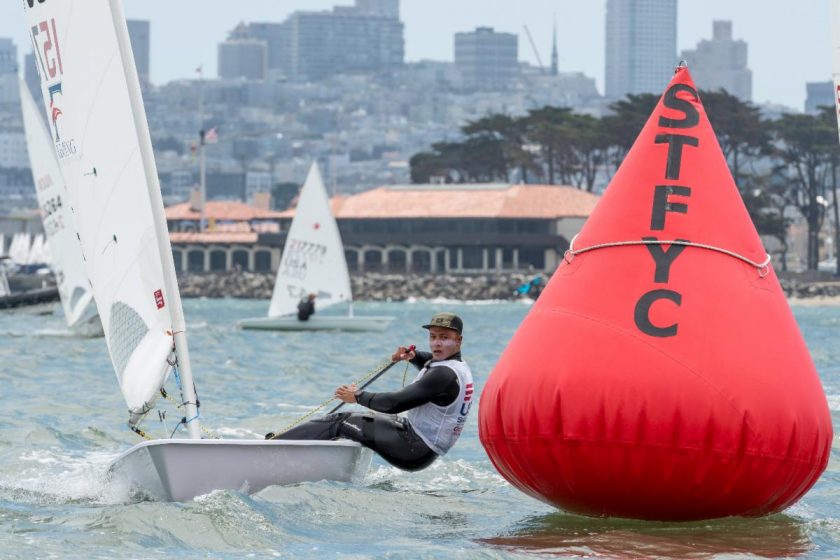 “It was great to see so much talent on the race course this weekend, as well as so many familiar faces,” said St. Francis Yacht Club’s Commodore Bill Dana. “I recognized a lot of the competitors from their Opti days and from Youth Champs, and to have them here again, sailing as adults, was a reminder that sailing is a lifetime sport. Plus, conditions couldn’t have been better.”

Typical of San Francisco Bay in July, the breeze was up throughout the event, ranging from 15 to 25 knots. Much of the regatta was sailed in a flood tide, which drew the fleet close to shore on the upwind legs, providing current relief for the racers and an exciting show for the spectators ashore. On Sunday, the final day of racing, an ebb tide sent the fleet to the middle of the bay where they engaged in an all-on drag race, riding the current train to the windward mark.

Each fleet sailed ten races, with two per fleet on Thursday and Sunday and three per fleet on Friday and Saturday, rotating morning and afternoon slots.

ILCA 7 (Standard)
In the 24-boat ILCA 7 fleet (standard rig), racing was consistently tight at the top, especially between four leaders who separated themselves from the pack: Leo Boucher, Ford McCann, Marshall McCann and Conner Nelson. All four are racing with the US Sailing Olympic Development Program.

On his win, Boucher said, “This was a pretty tough event. It was shifty coming off the yacht club so positioning was important going upwind. Downwinds were all about keeping it upright and staying as loaded up as possible. Overall, I’m stoked to have won and we’ll see what happens at the next one.”

ILCA 6 (Radial)
With 75 boats entered, the ILCA 6 (radial) fleet was the largest by far. For the regatta’s first two days, race organizers randomly divided the group into Blue and Yellow fleets. On Saturday and Sunday, the fleet was split into Gold (38 boats) and Silver (37 boats).

In ILCA 6 Gold, Charlotte Rose (Houston Yacht Club, ODP) secured a hard-fought 1st place, finishing the regatta with 22 points and demonstrating the power of persistence. Though she was a few points from the podium after Days 1 and 2, she entered the final day in 2nd and then locked up the North American Championship with a 2 in Race 9 and a 1 in Race 10. “This was tough racing, especially with the current,” said Rose. “It was a really great event and I love sailing here!”

Rose was followed closely by Robby Meek (Lauderdale Yacht Club) in 2nd with 26 points, and Guthrie Braun (St. Petersburg) in 3rd with 29 points.

ILCA 4 (4.7)
While the other two fleets came down to the wire, a clear winner emerged early in the ILCA 4 fleet. Of the 25 ILCA 4s competing, Matheo Capasso of the Cayman Islands maintained a commanding lead across all four days. Coming into the final day of racing, he had won all but one race (in which he scored a 2) and sat an impressive 25 points ahead of the 2nd-place boat, Xavier Stoldt (LEHYC/KBYC). Though Capasso was over early in Race 9, he secured a final bullet in Race 10 and finished the regatta with just 11 points over 10 races.

On his dominant win, Capasso said, “It wasn’t easy. Conditions were quite difficult, especially today. I was over in the first race today which made the second even more important. But overall, I’m really pleased with how I did.”

A Championship, on Many Levels
One year ago, hosting 124 sailors plus their coaches, families and supporters, would have been an impossibility. As this successful championship came to an end, the mood among regatta organizers was, deservedly, very positive. “We had some great racing that brought out true champions this weekend,” said Tracy Usher, Regatta Chair and longtime ILCA racer. “This class has a deep history at St. Francis Yacht Club and it felt like a victory to be able to host a full-on Championship for them.”

The Championship also served as a qualifier for the US Sailing Junior Pan-American Team, with the top eligible finisher from the ILCA 7 fleet (Leo Boucher) and ILCA 6 fleet (Charlotte Rose) qualifying.
Watching the strength of the young sailors in this Championship, St. Francis Yacht Club’s Senior Sailing Director Adam Corpuz-Lahne said, “It was great seeing the entire US Sailing Olympic Development Program out on the race course. The depth of talent is huge in this next generation of dinghy sailors, and the future is bright!”

TO REVIEW THIS WEEK’S RACING: