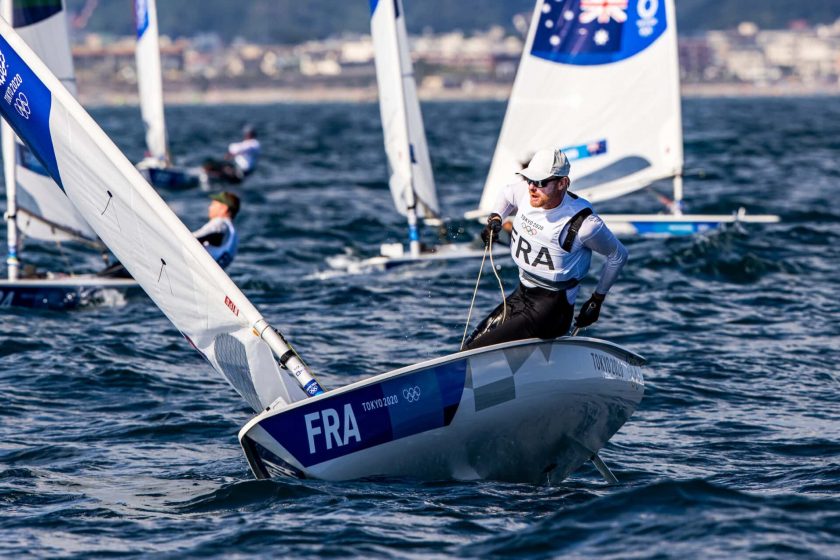 The opening day of the Laser Radial competition was full of surprises. The Kamakura course proved brutally tricky to read in the light, offshore winds, and some big names took a tumble today while some lesser known lights rose to the occasion.

Few would have predicted that Germany’s Svenja Weger would emerge from the melée in first overall, following a solid fifth place in her opening race with a runaway victory in the next. Asked for the secret to her consistency, Weger said, “My coach gave me some really, really good information. I chose to go to the left side which was favoured a lot and which helped me have a good race. And then the second race, I don’t know… I just started in the middle and played it from there.”

The German couldn’t hide her excitement. “It’s amazing. It’s amazing. I don’t know what to say about it. Like, I was almost crying when I was crossing the finish line, but it’s a great feeling. I couldn’t have imagined that the regatta would start like this for me.”

Much more expected is that Anne-Marie Rindom sits in second overall after finishing sixth and fifth, and the Dane must be counting her lucky stars that she didn’t suffer the fate of other medal favourites. “I’m happy about my performance. It was a solid day. I made a great comeback in the second one, which I’m very proud of. It’s not easy at the Games. There’s a lot of nerves.”

Rindom was the bronze medallist from Rio 2016. Marit Bouwmeester, the reigning Olympic Champion from the Netherlands, opened her day with scores of 21,14, which leaves her in 18th overall. Five places further back in the standings is the Olympic silver medallist from Rio, Annalise Murphy (IRL).

While some of the established names struggled with the unpredictable conditions, others seized the opportunity. Two points behind Rindom in third overall is Elena Vorobeva (CRO) who was vying for the front of the first race before being given a penalty for too much kinetics downwind. She came 11th in that heat and then followed with second place in the next.

Cristina Pujol (ESP) had the most thrilling of starts to her first Olympic Games. “I scored a first in my first race at the Olympic Games! I couldn’t believe it! I’m very, very happy!”

On the other hand, spare a thought for Paige Railey of the USA who has been campaigning hard in the Laser Radial since 2005. Now at her third Olympic Games and widely considered a serious contender for the podium, she crossed the finish line of race one in 40th, and was disqualified in the next for starting too early. “It’s a rough day for me,” said the 34-year-old. “Now I just need to take one race at a time and just do as good as I can.”

Only one race was completed for the Laser today, and line honours went to Jean-Baptiste Bernaz of France.

“It’s always nice to start well, but it’s the very beginning. The conditions were really freaky but when you are leading the race, it’s always easier.” The Frenchman finished just ahead of Kaarle Tapper of Finland, and then a long gap back to the pack, headed by Norway’s Hermann Tomasgaard.

There were plenty of ups and downs, and one of the biggest gainers during the race was the London 2012 silver medallist from Cyprus, Pavlos Kontides, who climbed from 27th at the first mark to fourth by the finish. His good friend and training partner, the Rio 2016 silver medallist from Croatia, Tonci Stipanovic, had a sniff of a top-10 finish but had to settle for 15th. “It was a crazy day up and down, but I hope tomorrow we will have some better conditions,” commented the Croatian.

Two places behind Stipanovic was another medal favourite, Australia’s Matt Wearn, two places ahead of New Zealand’s Sam Meech, the bronze medallist from Rio. It’s going to be that kind of regatta. Not for the faint-hearted.