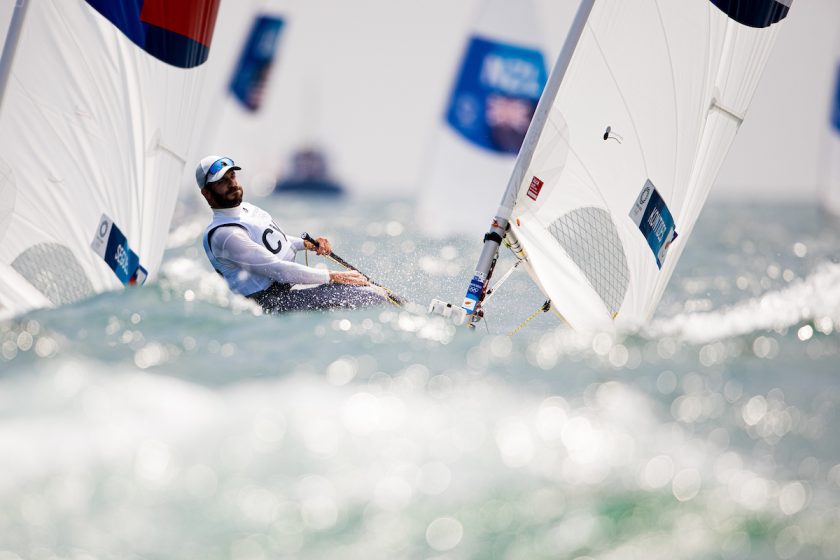 The excitement kicked up a gear on the third day of the Tokyo 2020 Olympic sailing competition. The wind was gusting and shifting wildly for the courses close to shore, and some pre-event favourites have made good comebacks in the Laser and Radial events.

Josefin Olsson was the big mover of the day in the Laser Radial, scores of 1,6 lifting the Swede to second overall. It was also a very good day for Marit Bouwmeester (NED) who continues to fight back after a difficult start. The Dutch sailor’s scores of 3,9 move the defending Olympic Champion into a podium position for the first time this week.

Just six points separate second to sixth place in the overall standings. However, 12 points clear is the ever-reliable Dane, Anne-Marie Rindom. She has talked a lot this week about keeping a head out of the boat and looking for ever-changing scenarios.

“Today was a head-out and a heads-up day, because the clouds had a really strong effect on the wind,” said Rindom. “I could hear my dad telling me ‘sail towards the cloud!’ but it didn’t always work. It was another really tricky day.”

Wednesday is a day off for the Laser Radial and Laser fleets, although Olsson would have liked to carry on her momentum from today. “It’s been pretty intense days on the water,” she commented, “so I suppose a rest would be good, but tomorrow it looks like really good conditions. It’s a bit of a shame as well not to be going racing again.”

The bad news for Pavlos Kontides fans is that the Cypriot superstar finished 20th in the middle of today’s three Laser races. The good news for Kontides fans was that he won the first race and the last race of the afternoon. This has launched the double World Champion into first place with a nine-point cushion on second place, which is occupied by Matt Wearn who has bounced back from a terrible start to the regatta with an incredible afternoon of consistency – 4,2,2 were the Australian’s scores.

Six points further back in third place is the oldest man in the fleet, Brazil’s five-time Olympic medallist Robert Scheidt. No matter how many medals he’s won in the past, 48-year-olds aren’t meant to be able to beat 20-something athletes at the peak of fitness, but Scheidt is no ordinary 48-year-old.

Just one point behind Brazil in fourth place is Hermann Tomasgaard (NOR) who sailed a very strong day and gives Norway hope of a medal in this unrelentingly tough fleet.

The Laser and Laser Radial fleets will enjoy a day of rest before competition resume on 29 July.