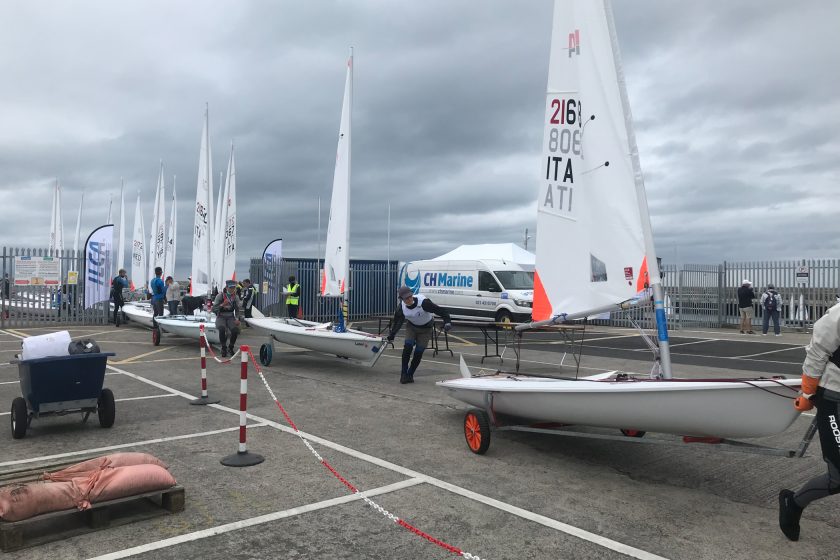 A busy morning in Dun Laoghaire today and everyone keenly awaited the start of day one at the 2021 ILCA 4 Youth World Championships. After a breezy day yesterday for the practice race, competitions were provided a full complement of races by the race management team for both the boys and girls divisions. Conditions were favourable and a moderate 10 to 15 (kts) from the South West obliged and provided great racing conditions on Dublin Bay.

The girl’s division is provisionally being led overnight by Annemijn Algra (NED) with Emma Mattivi (ITA) in second and Petra Marednic (CRO) is lying third. Best of the Irish is Eimer Mcmorrow Moriarty 21st in a fleet of 80+ competitors.

Annemijn Algra from the Netherlands (NED) who is leading the girls division overnight comes with high hopes after winning the European Championships which was part of the 132nd Travemünde Week in Germany only 10 days ago.

The boy’s division is provisionally being led overnight by Martins Atilla (LAT) with Daniel Cardona Balsa (ESP) Alp Hosgör (TUR) is lying third. Best of the Irish boys on the opening day was Archie Daly 38th in a fleet of 150+ competitors.

First U16 Girl is Signe Brinkert (NED) and Boy is Alexandros Eleftheriadis (GRE).

The competition today was intense, and competitors are highly motivated after a great days racing and will now be debriefing with their coaches on how they can find that extra bit of performance for tomorrow and build on todays success.

The racing format in this world championships will see both divisions compete for 2 more days in a qualifying series and a further three days in the finals series to eventually decide who will be crowned the 2021ILCA 4.7 World Champion in this highly competitive fleet. With lots of racing still to go competitors will be looking to keep a clean sheet and stay in contention throughout.

Fleets are planning to launch tomorrow at 10:30 and viewing from the Dun Laoghaire pier is highly recommended. Don’t forget to follow our event hashtag #47worlds2021 and stay tuned for further updates.