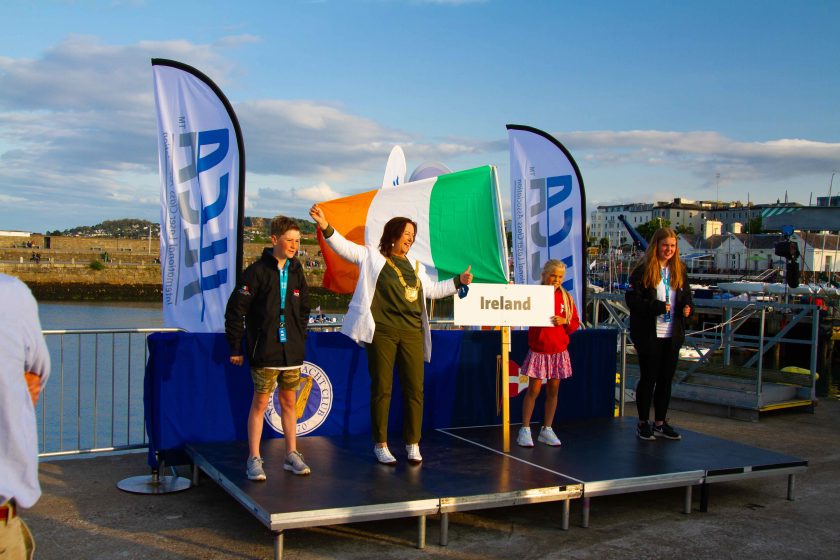 Practice race day for the ILCA 4 Youth World Championships were held today in Dublin Bay. More than 230 competitors from 32 countries will participate in the event.

Blustery conditions were prevalent across Dublin Bay, today with winds gusting 25+ kts. The race team successfully managed to get the fleets away and get the important practice race started. The enthusiastic sailors blew off the cob webs and did a final test of all the gear. They are all set now for tomorrows first day of racing.

Following the practice race the event was officially opened by Event Chairman Ian Simington and his team. The opening ceremony was supported by young local Optimist sailors who will be looking at the ILCA 4 as part of their progression path.

This event is being co-hosted by the Royal St. George Yacht Club and The National Yacht Club in Dun Laoighaire, Co. Dublin with the support by Dun Laoighaire Rathdown County Council, Fáilte Ireland and Irish Sailing.

The event will run from 07 to 14 August 2021 and this is the third time in five years that Ireland has been chosen to host an ILCA World Championship for the International Laser Class Association. In the challenging backdrop created by the global pandemic, the race team have diligently worked to ensure all activities are fully compliant whilst ensuring safety and fun for the young competitors.

ILCA boats are sailed throughout the world in huge numbers including at the Olympic games by both male and female competitors.

A super week lies ahead. We will keep you informed of the spills, thrills and highlights!

Forecast for today 7 to 9 knots, WSW. Best of luck to all!