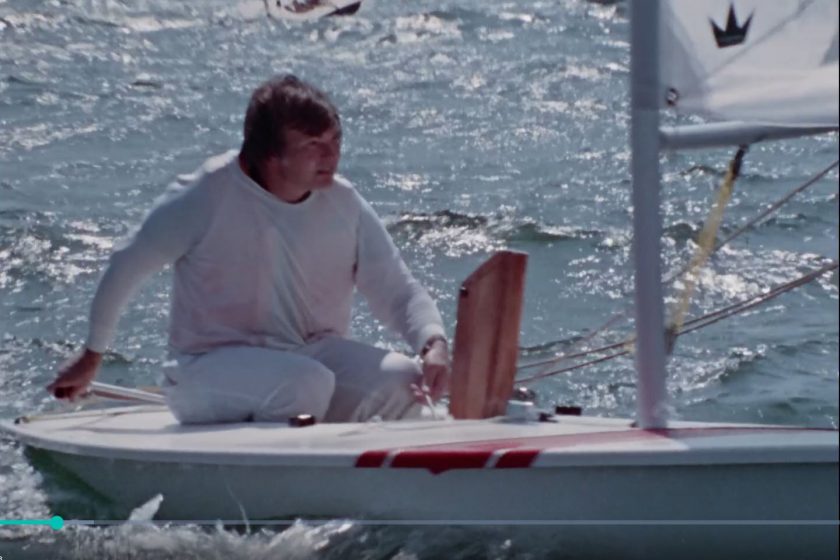 Weekender – Laser – ILCA Dinghy: A look back at the beginning of the world’s most popular one-design!

In the spring of 2016 I attended Ian Bruce’s celebration of life at the Royal St. Lawrence Yacht Club in Montreal. I was fortunate to have known Ian and learned much from competing against him in a number of Laser regattas back in the mid-late 1970’s and at the 351-boat 1980 Laser World Championships held in Kingston, Ontario. Ian was a passionate and accomplished sailor who won many regatta titles and represented Canada twice at the Olympics. But of course he is best known for innovating a new class of small sailing dinghies, designed for the mass market but fast enough to interest the world’s top sailors.

At the celebration of life I noticed a VHS video playing on a small TV in the yacht club. It was a 1974 film called ‘The Boat that Ian Built’ featuring the amazing success story of the Laser, and of Performance Sailcraft, the company Ian formed to produce and market the boat. Simply designed by Ian’s friend, Bruce Kirby, durably built, fast and fun, it is a pleasure craft that has brought recreational sailing, club racing and high intensity Olympic competition for sailors of all ages and both genders.

I set out to find out how I could obtain the rights to release the film for viewing around the world. It took a while, but I thank the National Film Board of Canada, who held the rights to the film, for allowing its release to coincide with the 50th Anniversary of the International Laser Class Association. The movie has fantastic footage of one of the first ever big fleet Laser regattas held at Association Island, New York on Lake Ontario near Kingston (with Ian Bruce competing!).

The movie has interviews with Ian, Bruce Kirby and Laser sail designer Hans Fogh and shots of Lasers being produced in Ian’s factory. You’ll also see amazing footage (that I previously didn’t know existed) of Hans Fogh helming the prototype Laser in an October 1970 regatta held for boats under $1000 at the Playboy Club at Lake Geneva in Wisconsin. It was called ‘The America’s Teacup Regatta’.

Ian and Hans decided to call the prototype the ‘Weekender’ with sail number TGIF, the abbreviation for ‘Thank God It’s Friday’.  The Weekender prototype had never been in the water before that regatta. Hans and the Weekender went on to win the event and the rest is history.  (Full story on that regatta with photos can be found here:  https://www.sail-world.com/Australia/The-American-Tea-Cup-Regatta-where-it-all-began/-76372)

So get together with a few sailing friends and enjoy the film!