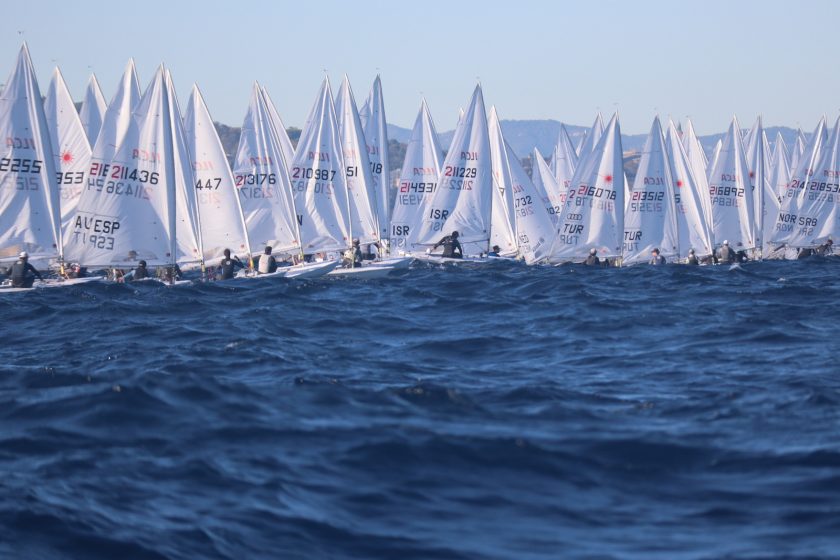 Barcelona, Spain – Two races were completed today at the 2021 ILCA 7 World Championships. The first warning signal was at 9:30, with three races scheduled for the day. Sailors went out on the water expecting 10–15 knots for the day, but the wind proved to be more unpredictable for Day 2.

Fortunately race 1 was completed, but before the race committee could move to start the second race, the wind dropped so far that the AP flag was hoisted and sailors were sent in. After an hour of waiting, when the day was close to being cancelled, the wind finally filled in again and the sailors were sent back out on the water at 14:45 with about 10–12 knots.

The wind continued to build for the second race to about 18–20 knots, along with big waves, to make for some tougher conditions. Hanson had a stellar day rounding out the second race in first place, with Russia’s Maxim Nikolaev behind in second and Croatian Olympic gold medalist Tonči Stipanović finishing third. In the yellow fleet’s race 2, Cypriot Olympic medalist Pavlos Kontides claimed first place, ahead of Great Britain’s European Champion Michael Beckett and Hungarian Jonatan Vadnai.

The second race finished just in time before sunset so the sailors could safely head back ashore. Three races are scheduled again for Sunday, Day 3, attempting to make up for the missed races on Day 1. First warning signal is at 10:00.

With two races locked in, Hanson is leading the regatta, with teammate Beckett just behind in second, and Saunders in third.