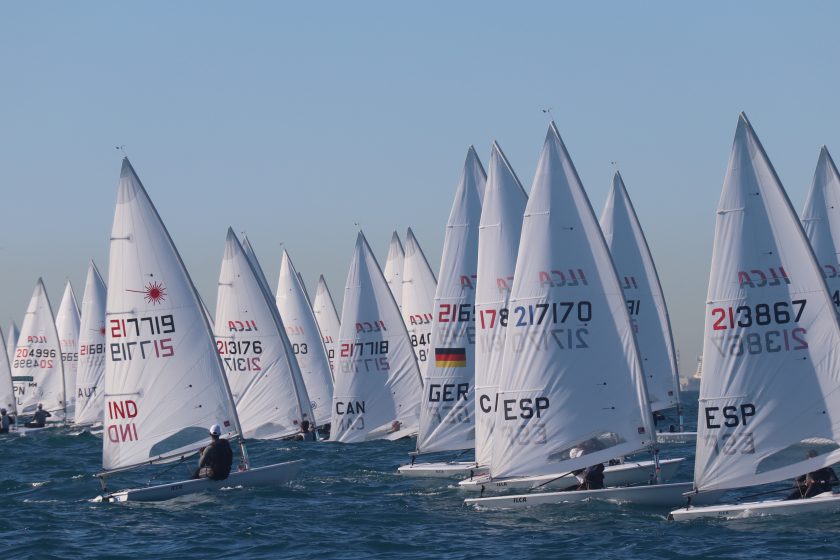 The sailors went out for the first warning signal at 9:00 and successfully sailed two races with a northwesterly wind oscillating between 8 and 12 knots. In the yellow fleet’s first race, Australian Zac Littlewood was the first to cross the finish line, followed by Turkey’s Berkay Abay and Russian Sergei Komissarov. In the blue fleet, Italy’s Giovanni Coccoluto was first, ahead of Great Britain’s Sam Whaley and Joel Rodriguez of Spain.

In the second race for the yellow fleet, Abay finished first, followed by Croatian Tonči Stipanović then Komissarov. The wind began to drop during the second race, so the blue fleet’s second race was shortened to finish at the gate. First place went to Spain’s Joaquín Blanco, second to New Zealand’s Thomas Saunders, and third to Great Britain’s Michael Beckett.

After the second races, the wind dropped so low that the AP flag was hoisted and the sailors were sent ashore. After a break on-shore in the warm sunshine, a southerly wind of 6–7 knots filled in and the sailors went back out for one more race.

In the third and final race of the day, Portugal’s Santiago Sampaio finished first in the yellow fleet, Komissarov claimed second, and Italy’s Nicolo Villa finished third. Cypriot Pavlos Kontides was first to cross the finish line in the blue fleet, with Spain’s Món Cañellas in second, and Whaley in third.

After the five races of the qualifying series, Great Britain’s Elliot Hanson maintained his lead overall, but is now tied with Komissarov with 15 points, and Saunders is only one point behind in third with 16 points.

The gold and silver fleets have been split heading into Day 5, and three races are scheduled with a first warning signal at 9:00.