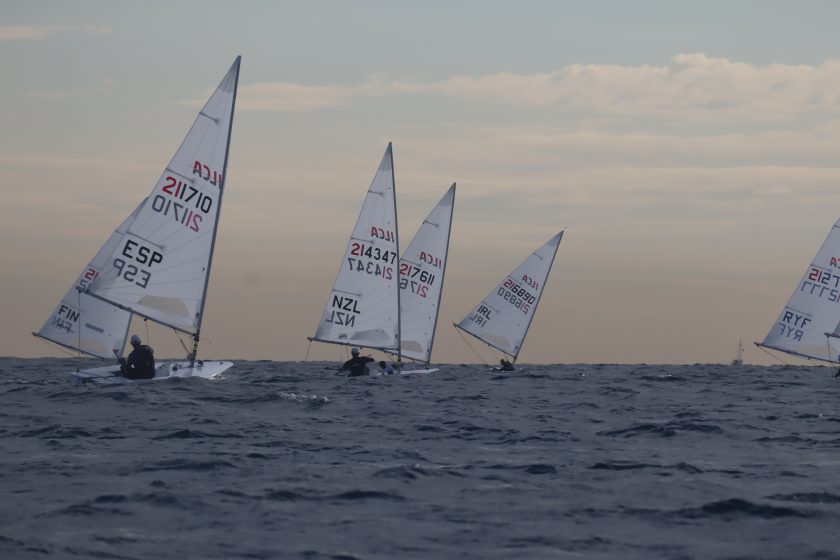 Barcelona, Spain – On the penultimate day of the ILCA 7 World Championships, three races were completed in the gold fleet and two in the silver fleet. The first warning signal was at 9:00 and the sailors went out to race in a 7–12 knot north/northwesterly breeze.

In the first race of the gold fleet, New Zealand’s Thomas Saunders was the first to cross the finish line, followed by Australian Zac Littlewood and Duko Bos of the Netherlands. In the second race, Russia’s Sergei Komissarov was first, with Ireland’s Finn Lynch in second and Great Britain’s Daniel Whiteley in third.

Both the gold and silver fleets successfully completed two races with sufficient wind, but the wind began to die in the gold fleet’s third race. They were able to finish the last race of the day – Lynch finished first, ahead of Saunders and Belgium’s William De Smet. There was not enough wind for the silver fleet to sail a third race, however, so both fleets were sent in for the day.

After his consistent day of top-four finishes, Saunders sits in first overall with a 14-point lead ahead of Lynch, and Croatia’s Tonči Stipanović holds third, 28 points behind Lynch and just two points ahead of Komissarov. Great Britain’s Elliot Hanson, who was holding first at the event until today, had a tougher day and retired from the last race early to sit in 17th overall.

Tomorrow is the final day of racing with heavy winds forecasted and a world title at stake. There are three races scheduled with the first warning signal at 11:00.