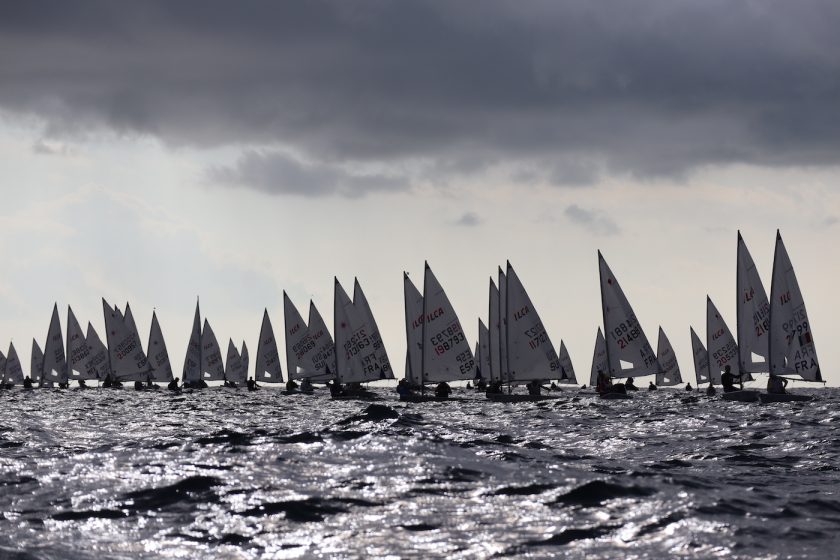 Barcelona, Spain – One race was completed today in each fleet at the 2021 Laser Masters World Championships, except for the ILCA 6 Masters and Grand Masters due to unstable and lack of wind. The sailors went out on schedule for the first warning signal at 12:00, with sunshine and good wind. But as the wind began to die, the two ILCA 6 divisions could not complete their first race, and the ILCA 7 fleet started their second race only to then abandon it.

In the ILCA 7 fleets, Maciej Grabowski of Poland is leading the Apprentices, ahead of Belgium’s Wannes Van Laser and Italian Lorenzo Cerretelli. Peter Hurley of the United States finished first in the Masters division, with fellow countryman Ernesto Rodriguez in second, and Australia’s Chris Caldecoat in third. The Grand Masters are lead by another American, Robert Hallawell, with Swiss Ferruccio Arvedi in second and Ron Lenson of the Netherlands in third. Finally in the Great Grand Masters division, Great Britain’s Michael Hicks took the lead, with Jose Luis Doreste of Spain behind in second, and Germany’s Wolfgang Herz in third.

In the ILCA 6 fleets, Great Britain’s Jon Emmett is leading the Apprentices, ahead of Arturo Reina of Spain and Italian Roberto Giacalone. In the Great Grand Master division, Americans Bill Symes and Bruce Martinson sit in first and third, respectively, with Canada’s Paul Clifford in second. Last but not least, Henk Wittenberg of the Netherlands is leading the Legends, with French Pierre Roche in second, and American Jacques Kerrest in third.

Forecasted wind for the week is light, but everyone is planning on and hoping for enough wind to complete some successful races.