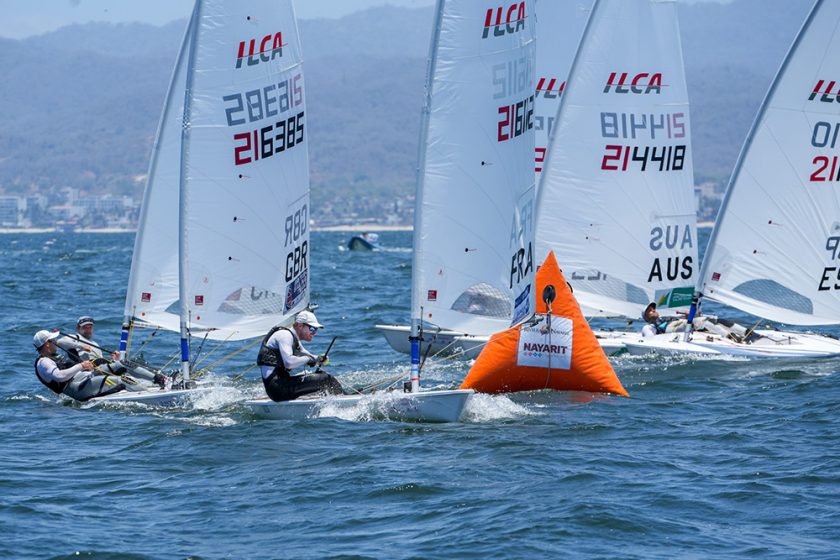 Vallarta, Mexico – Classic Banderas Bay conditions continued for day 2 of the 2022 ILCA 7 Men’s World Championship. The daily thermal was a bit softer as the fleet lined up for race 3. At the warning signal for Yellow fleet, the race committee had 8-10 knots of wind and close to a knot of current pushing the sailors away from the line and away from the pin. Nevertheless, the Yellow fleet started all clear on their first try.

The Blue fleet set up a bit too close to the starting line and had to be recalled on their first attempt, but their second try under Black flag was all clear.

During race 3, the winds built into the mid-teens keeping fleets sailing very close to each other. In Yellow fleet, a tight pack of a dozen boats rounded mark 5 within 10 seconds battling for the race win. Eventually, Just Van Aanholt (ARU) was the fastest in the fleet and took the win in front of Niels Broekhuizen (NED) and James Percival-Cooke (GBR). The Aruban sailor is the first sailor at the championships with two race wins.

The winds continued to build into the upper teens with ample sunshine as the sailors got started on race 4.  The race committee extended the leg of the weather leg to 1.05 nautical miles. The Yellow fleet had a general recall and then started all clear on their second try.

The Blue fleet was a bit more aggressive, after two general recalls, one under Black flag and they got off on their third attempt. With former World Champion Phillipp Buhl (GER) sailing to a comfortable win over Daniel Whiteley (GBR) and Jean-Baptiste Bernaz (FRA).

Four races have now been completed for all fleets, which meets the minimum of races for a valid championship and gives the sailors their first discard.

Tomorrow, on the third racing day, which will be the last day of Qualifying series, two races are scheduled for both fleets with the first possible warning signal at 1300.