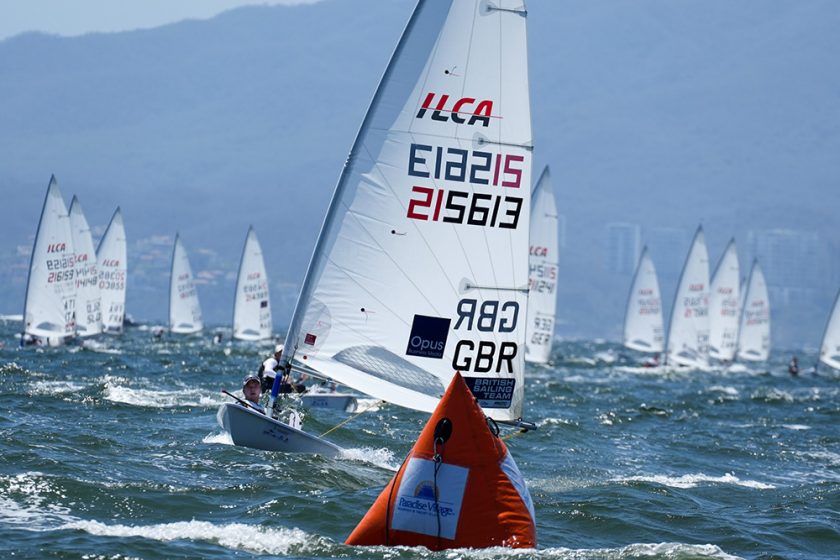 When the race committee left shore for racing today there was already a nice 8-10 knots of wind with gusts already over 10. As the race committee set up for race 5 the wind had increased in strength to 12-14 knots from the customary 230-245 range. The course length was set at 0.95nM with yellow fleet starting clear under U Flag starting penalty ,however blue fleet had a recall before starting clear on their second attempt under black flag.

The three fastest in the Yellow fleet in Race 5 were Jonatan Vadnai (HUN), Jean-Baptiste Bernaz (FRA) and Pavlos Kontides (CYP), when in Blue fleet Elliot Hanson (GBR) finished first in front of his countryman Sam Whaley and Benjamin Vadnai from Hungary. It was definitely a great race for the Vadnai brothers by finishing both in top 3.

For race 6 the wind remained steady in both direction and strength meaning for the first time the race committee did not change the course between races. Both fleets started at the first attempt.

Pavlos Kontides (CYP) was victorious in the second Yellow fleet race ahead of Jean-Baptiste Bernaz (FRA) who finished second and Filip Jurišic (CRO) in third place. Today’s consistent sailing from Bernaz has maintained his overall lead in the regatta, however former World Champion Kontides moved up several places to fifth with his strong performance today.

The championship will continue with the Final series where maximum 6 races will be sailed over the next 3 days. Now on the top half of the fleet will sail in the Gold fleet when another half sails in Silver fleet.

In Qualifying series frenchman Jean-Baptiste Bernaz showed a very consistent sailing (19, 3, 2, 3, 2, 2 places) and keeps holding his lead. However, Elliot Hanson (GBR) and Jonatan Vadnai (HUN) are just a few points behind of Jean-Baptiste.

Tomorrow, on the fourth racing day and the first day of Final series, two races are scheduled for Gold fleet and Silver fleet, with the first possible warning signal at 1300.