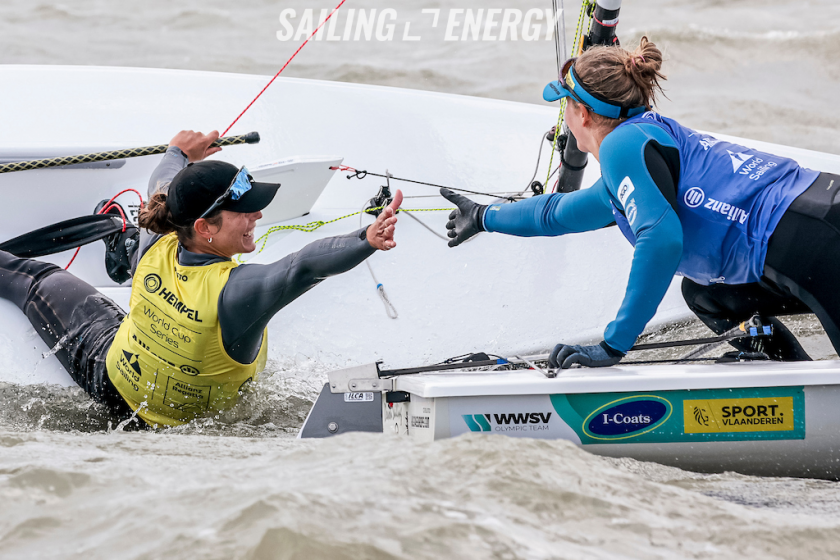 Almere, The Netherlands – [On the final day of the event,] Vasileia Karachaliou (GRE) left nothing to chance in her bid to retain the yellow jersey. She engaged her rival Emma Plasschaert (BEL) in an aggressive match race before the start. But then an individual recall flag went up on the race committee boat. Someone was over the line, but who? Not prepared to take the risk of a non-finish, Karachaliou turned back, followed swiftly by Plasschaert. This played perfectly into the hands of Greece, who maintained control of Belgium all the way around the race course, the two gold-medal contenders sitting in 9th and 10th for most of the two laps.

Meanwhile a battle was raging between Mara Stransky (AUS) and Anna Munch (DEN) for the final podium place. At one point Stransky even climbed into silver medal position ahead of Plasschaert. But down the final run it was Munch who screamed into podium contention after finding an extra burst of surfing speed to claim the bronze medal for Denmark. Silver to Plasschaert and gold to Karachaliou, and a mutual congratulations between the two leading contenders despite the aggression and intensity of the duel.

“It was nothing personal,” smiled Karachaliou. “I could have gone out to just sail a good race, but this was an opportunity to practise a different kind of medal race, one that we might have to face at the Olympics. I’m happy with how the race went, although going back at the start was not in my plans! But to win a World Cup gold medal, it means a lot.”