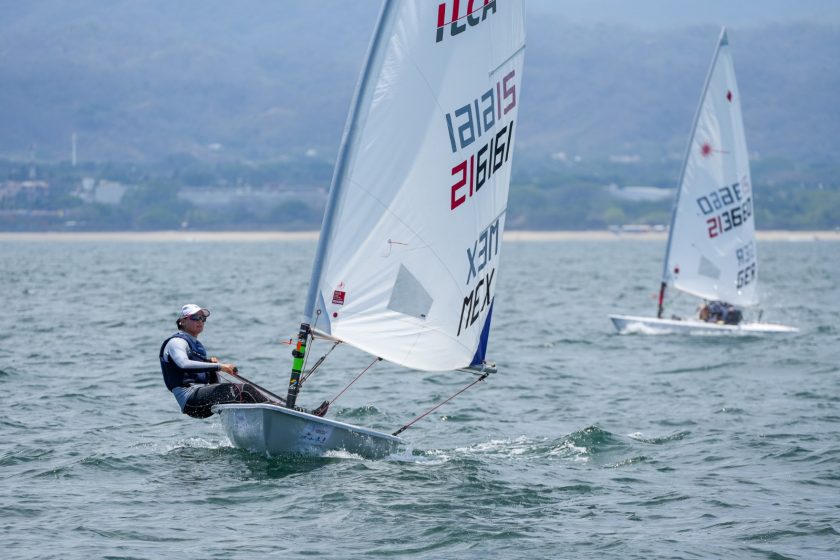 Vallarta, Mexico – Two races were completed today at the ILCA 6 Masters World Championships in Riviera Nayarit, Nueveo Vallarta, Mexico. Banderas Bay continues to deliver beautiful sailing conditions. The fleets were greeted with eight-knot winds for the first race today, and the shifts kept competitors and the race committee on their toes. There were general recalls for both the Apprentice and Masters divisions (racing as one fleet) and the Great Grand Master and Legends divisions (also starting together). As the thermal winds continued to develop throughout the day, the wind stabilized for the second race to a pleasant 12–15 knots. The leading sailors showed excellent fitness for the hiking conditions upwind and sharp skills to manage the waves in the surfing conditions on the downwind legs.

In the Apprentice division, the competition is tight after Mexico’s Tania Calles won the first race of the day, followed by a fifth, while Great Britain’s Jon Emmett placed third in the first race, but won the second. Greece’s Antonios Kondis had a steady, consistent day securing two second-place finishes. Emmett still holds first, Calles is in second, and Kondis is in third.

In the Masters division, Great Britain’s Ian Gregory locked in two more firsts to hold the lead, and fellow countryman Niall Peelo is behind in second ahead of American Sumeet Patel in third.

The Legends division, perhaps the most impressive, is a fleet of sailors over 75 years old. Three Americans hold the top three spots – Bill Symes added two more firsts to his picket fence, Chris Boome sailed two seconds today, and Jonathan Andron sailed two thirds. They sit in that order on the leaderboard after today.

Two races are scheduled for tomorrow and the forecast is mostly the same as today – perfect for sailing.