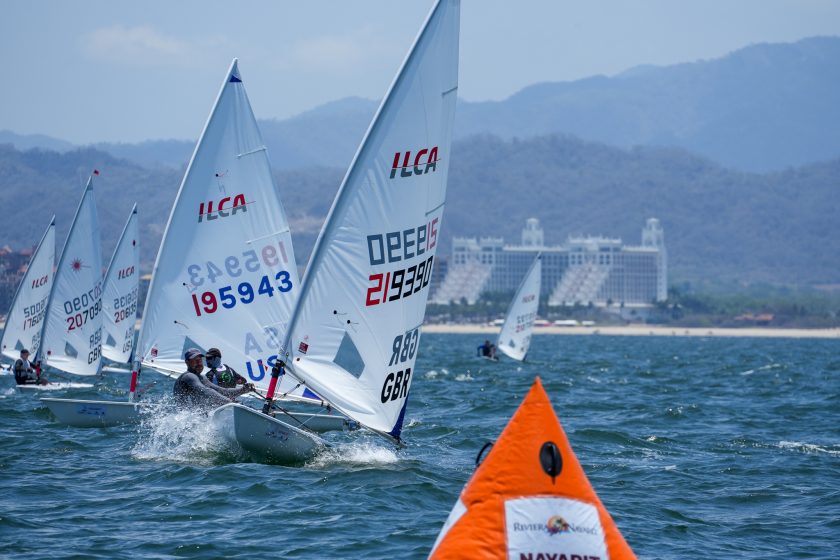 Vallarta, Mexico – Two races were completed today at the ILCA 6 Masters World Championships in Riviera Nayarit, Nueveo Vallarta, Mexico. A perfect day of sailing developed after a marginal forecast for the third day. The race committee went out early to monitor the wind and held the sailors on shore for few extra minutes to let the thermal breeze develop and stabilize. Going right was the order of the day, as the wind swung from 210 to 250 degrees over the course of the afternoon. The sailors enjoyed brilliant hiking conditions in a 12–15 knots of sea breeze, which set up spectacular surfing for the downwind legs. The warm temperature also took its toll on some of the sailors – a reminder to all to stay hydrated in the tropical climate. Regardless of finishing position, all the competitors were treated to a blasting broad reach after racing, from the race course back into the harbor. Some claimed that the ride home was the highlight of the day.

In the Apprentice division, Jon Emmett of Great Britain extended his lead by adding two more first-place finishes to his scoreboard. Greece’s Antonios Kondis jumped into second overall after sailing another consistent, solid day and finishing with two seconds – just as he did yesterday. Mexican Tania Calles now sits in third overall.

In the Grand Masters division, American Andrew Holdsworth won the first race of today and Canadian Allan Clarke won the second race. But overall, Australian David Luketina still sits in first while Clarke and Holdsworth are in second and third, respectively, tied with 12 nett points.

In the Legends division, American Bill Symes has maintained his leading position ahead of fellow countrymen Chris Boome, who won the first race today, and Jonathan Adron.

Tomorrow is a well-deserved day off for the competitors. Racing resumes Wednesday with two more races scheduled.