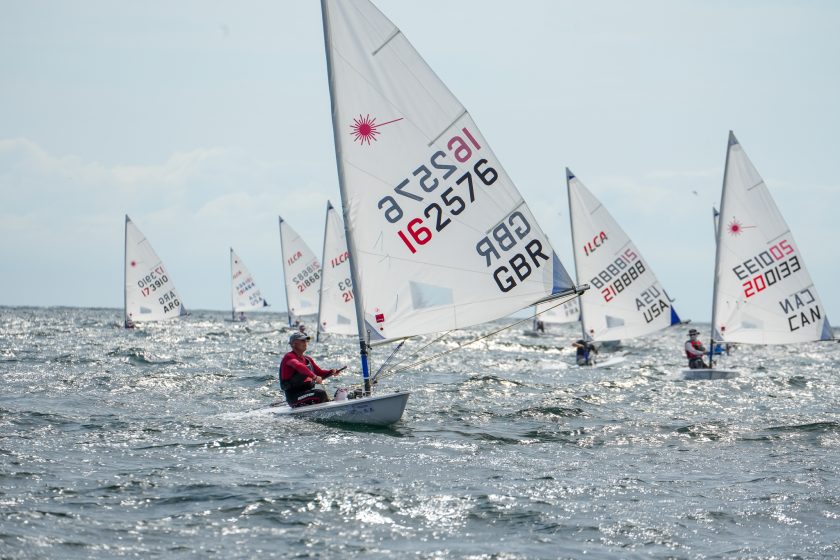 Vallarta, Mexico – Moving west off the southern coast of Mexico, Hurricane Blas left its mark on the penultimate day of racing at the 2022 ILCA 6 Masters World Championships. Although the storm is moving safely away from Banderas Bay, the anticyclone effects were still being felt with largely overcast skies, cooler temperatures, and lighter winds.

Forecasts were for light wind, as the race committee took to the water before noon to monitor for wind. After several hours of waiting, the thermal breeze finally developed, although delayed by the offshore flow created by the hurricane.

Sailors were called to the water by mid-afternoon with a thermal breeze just starting to develop.

Ultimately, all fleets completed two solid races in 12-knot southwest winds. The lighter breeze and large ocean swell rewarded those with the best downwind technique who were able to get the most out of the waves.

American Bill Symes, Great Britain’s Ian Gregory, and his fellow countryman Jon Emmett all got back on pace today, each adding two more first-place finishes to their almost perfect score lines. Canadian Allan Clark and Australia’s Jeff Loosemore also had excellent finishes to extend their leads in their respective divisions.

Tomorrow is the final day of the championship with two more races scheduled. Competitors are looking for the wind to fill in early to complete both races before the 3:00 PM last warning signal.