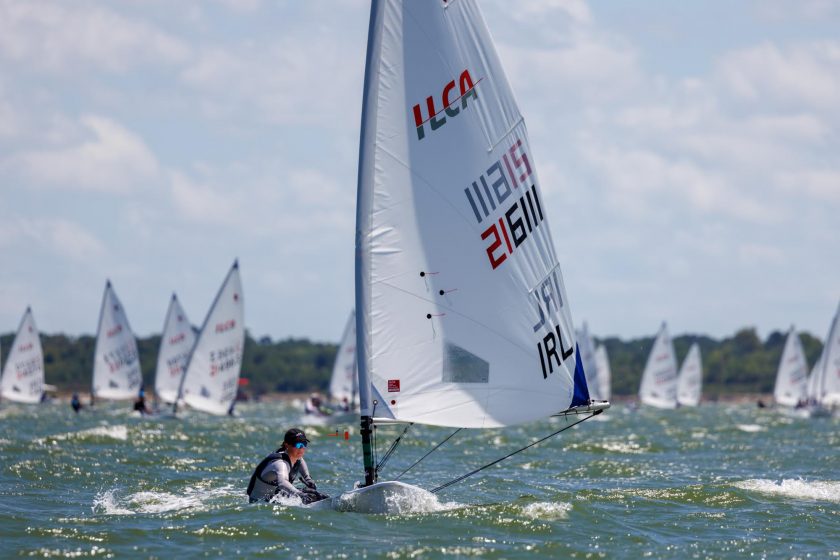 Shoreacres, TX, USA – The 2022 ILCA 6 Youth World Championship kicked off racing on Monday, July 25 under clear skies with a warm breeze. The sailors were divided into four fleets – one division for the 50 women sailors, and three divisions for the 156 men competing. The racing began at 1400 in about 8 knots, and over the course of the afternoon, the wind built to 15 knots from a consistent direction. There were several general recalls, but two races were completed on the first day of the event.

The second day of the event brought showers at midday to delay the beach launch, but once again, Galveston Bay provided a steady southeast summer breeze for racing. At 1400 the first signal sounded and racing began in about 12–14 knots. The women’s fleet had one general recall and some of the men’s divisions had a few UFDs again, but two more races were completed and all the boats were off the water by 1800.

Ireland’s Eve McMahon, who won gold at the 2022 Youth Sailing World Championships in the Netherlands a few weeks ago, already has a picket fence after the first two days of racing in the women’s fleet. German Linda Hensel sits in second overall with a consistent performance so far, locking in top-five finishes. Croatia’s Tea Peteh’s first race of the championship was a ninth-place finish, but she has since placed third in the following three races to put her in third overall.

In the men’s division, Caleb Armit of New Zealand leads the way after starting the championship with a third-place finish, but winning all three subsequent races. Italian Mattia Cesana is close behind with all top-five finishes so far. Cesana also won both of Tuesday’s races in his division. Ireland’s Fiachra McDonnell won the first race of the championship in his division and has since sailed top-five finishes to sit in third overall. The other 2022 Youth Sailing World Champion, Rocco Wright of Ireland, currently holds 14th place out of the 156 men.