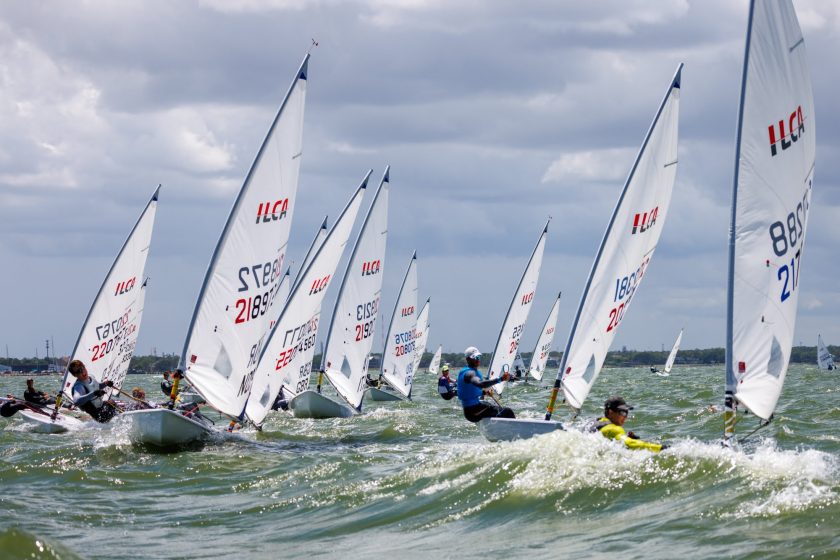 Shoreacres, TX, USA – Two races were completed on the fourth day of the 2022 ILCA 6 Youth World Championship. It was another day of consistent weather, with a midday sea breeze building for the afternoon. About 14–16 knots filled in for the first set of races, and again there were some general recalls under the U flag and some penalties and disqualifications in the men’s fleets. The women’s fleet and men’s gold fleet started the second set in similar wind, and the competitors were eager to start but not overly aggressive and there were just a couple UFD penalties in each fleet. The wind began to shift and lighten to 10–12 knots for the remaining two fleets. All boats were off the water before 1800.

In the women’s fleet, Linda Hensel of Germany is keeping Irish Eve McMahon on her toes. Hensel broke McMahon’s perfect streak of bullets by winning both of yesterday’s races herself while McMahon placed second in the first race and third in the second race. McMahon still has an eight-point lead over Hensel, and Croatian Tea Peteh still holds third overall after sailing another consistent day with finishes of fourth and second.

In the men’s division, Italian Mattia Cesana is still in first tied for points with New Zealand’s Caleb Armit. Armit had a difficult first race yesterday, finishing in 27th while Cesana won the race. In the second race, Cesana placed ninth while Armit placed second. With a race drop, Cesana and Armit both have 11 net points heading into today, keeping competition extremely tight. Sweden’s Erik Norlén had another solid day of top-10 finishes to maintain third overall, just eight points behind Cesana and Armit.

Two more races are scheduled for today in the Final series. For updates, results, and media reports, see event website and photos.