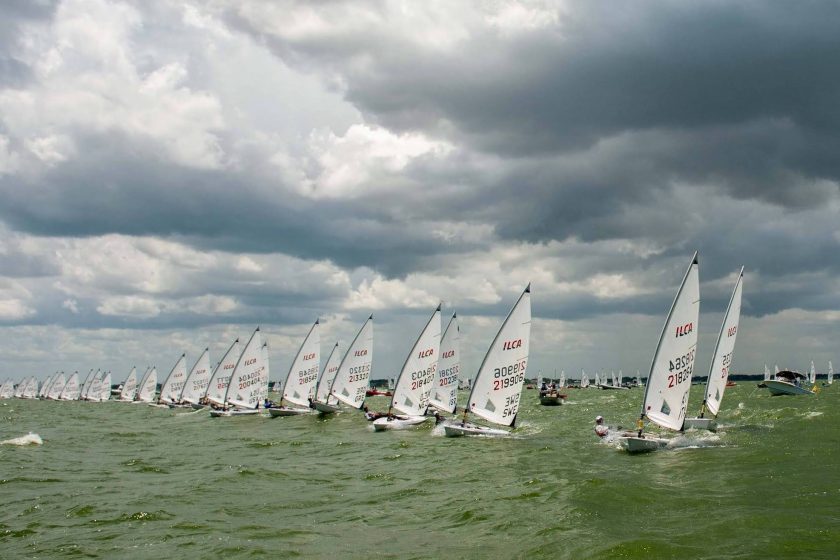 The wind was lighter than previous days, starting the day with 6–8 knots, but the sea breeze built to normal Galveston Bay conditions over the first two races to 12–15 knots. The first two races got off clean and and were successfully completed with time left in the day for the third race, which also got off clean with few general recalls.

In the women’s fleet, McMahon won the first two races of the day to continue her winning streak and ended the day with a fourth-place finish, which became her drop race from the championship, locking her in for gold. This is McMahon’s third gold medal this summer after winning the ILCA 6 Youth European Championships in Greece and the Youth Sailing World Championships in the Netherlands. She finished the event with only 13 net points. Second place went to Germany’s Linda Hensel with 26 net points, who finished eighth in the first race of the day followed by two seconds. Tea Peteh of Croatia secured bronze with a 13th, third, and first in yesterday’s races. The leaderboard of the women’s division was maintained all week by these three women and they all were able to sail consistently enough to bring it home.

In the men’s division, Cesana headed into the final day tied for net points with New Zealand’s Caleb Armit and only eight points ahead of Swedish Erik Norlén. Cesana won the first race while Armit placed 18th, and Norlén seventh. In the second race, Cesana finished in sixth, Armit in 13th, and Norlén finished second behind American Robert Meek. The last race of the day went to Armit, Cesana placed fourth, and Norlén fifth. Cesana secured gold with those scores, and Norlén’s consistency pushed him into second overall to claim silver, 10 points behind Cesana. Armit won bronze, 10 points behind Norlén.

The sailors were into shore by 1800. After a buffet dinner, the closing ceremony was held at sunset in front of the main flagpole. For more info, see event website, final results, and photos.