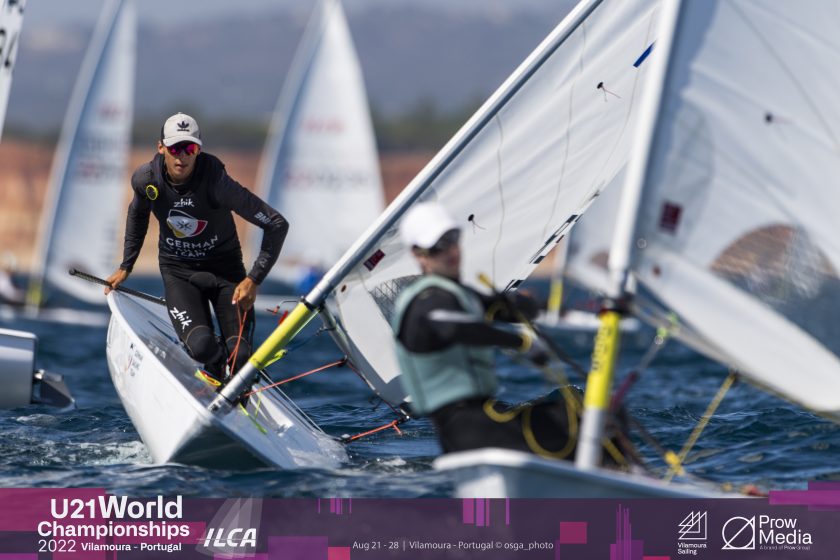 Vilamoura, Portugal – Two races were completed today at the 2022 ILCA U21 World Championships. It was another morning without wind, so the race committee displayed the AP flag to start the day. The wind finally filled in around 16:00 with about 6–7 knots, which was enough to get off two races. During the second race, the breeze picked up to 9 knots, and the race committee was hopeful they could complete a third race as scheduled, but shortly after, the wind died down again just in time to complete the second race. Once again, there were some new names on the leaderboards after today’s races.

In the ILCA 7 division, Germany’s U19 sailor Ole Schweckendiek is leading by one point ahead of Portugal’s José Mendes. Each of them scored a total of nine points today, sailing very consistent races. Mendes is just one point ahead of Schweckendiek’s teammate, Julian Hoffmann. With only two points separating the top three sailors, competition will surely be very tight and exciting on the final day.

In the ILCA 6 division, Belgium’s Eline Verstraelen was the only sailor to consistently score two single-digit finishes today, boosting her up to first overall. Irish Eve McMahon is just six points behind, closely chasing her fourth international title this summer. McMahon is only four points ahead of Italian Giorgia Della Valle in third. Every sailor has had some inconsistent finishes in this fleet, which will make the final results very susceptible to shake up tomorrow, depending on which races get dropped at the end of the event.