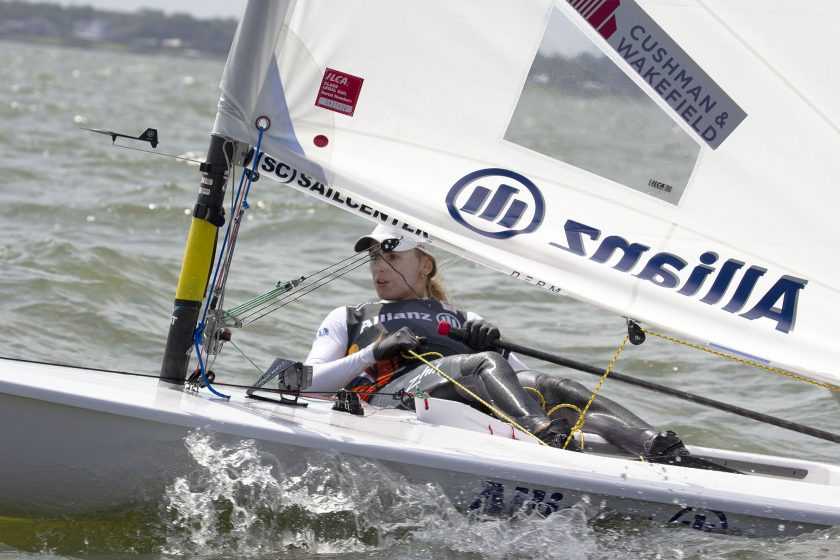 Kemah, Texas, USA – One race was completed today at the 2022 ILCA 6 Women’s & Men’s World Championships, and three-time Olympic medallist Marit Bouwmeester of the Netherlands is now leading the event.

Tokyo Olympians Maud Jayet of Switzerland and Elena Vorobeva of Croatia won today’s races. Jayet moved into third overall, tied with Canadian Tokyo Olympian Sarah Douglas in fourth, both with 14 points. Italy’s two-time Olympian Silvia Zennaro finished with a fifth place today to round out three top-five finishes and tie with Bouwmeester, both with 13 points in total. Only one point separates the top four sailors heading into Day 3.

Bouwmeester leading the fleet after two days is a remarkable feat, as she is on the road to recovery from pregnancy and delivering a baby girl just five months ago. “I do feel I’m lacking a bit of speed here and there, but I’m just trying to do my best,” says Bouwmeester. “I’m still trying to balance everything and organize things at home with the baby, so it’s still quite a bit of a challenge… I expected to come back sooner and a bit easier, but it is what it is and I’m doing it step by step… The positive thing is that you don’t take a day on the water for granted, because it’s not easy – there are so many people involved now for me to go sailing, so whenever I’m on the water, I try to make the best out of it.” When asked about her expectations for the event, she explained, “Normally I’d only go to a Worlds or participate in it to win it, but this time it’s completely different because I’m in the process of coming back. It’s more about getting an idea of where we are instead of trying to get a certain result.”

In the men’s fleet American Peter Barnard is still atop the leaderboard after winning today’s race. Americans Nicholas Mueller and William Baker are in second and third overall.

Two races are scheduled for tomorrow in each fleet, with the first warning signal at 12:00. For more information, follow the event at 2022ilca6.ilca-worlds.org