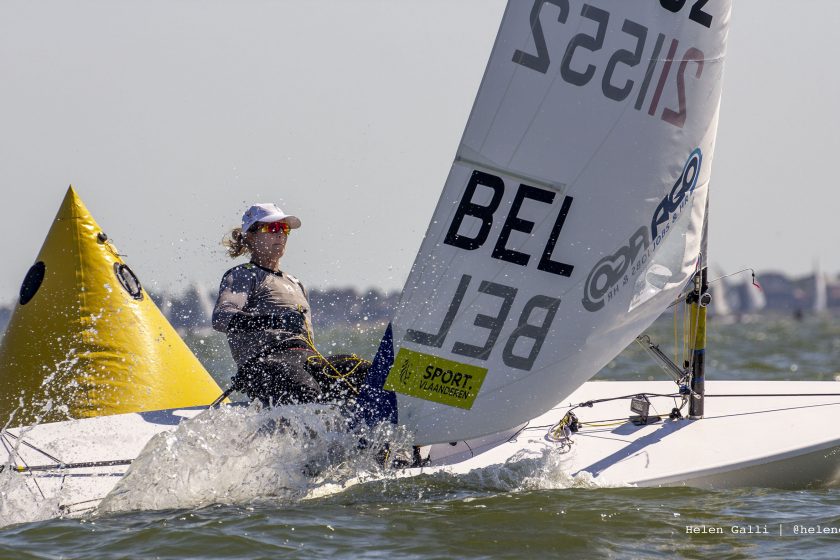 Kemah, Texas, USA – Three races were completed today in the final series at the 2022 ILCA 6 Women’s & Men’s World Championships. With such tight competition, there is yet again a new leader of this event – Belgium’s Tokyo Olympian Emma Plasschaert.

The sailors set out onto Galveston Bay on time for the 12:00 first warning signal. The first race kicked off, but like the past couple days, the wind died soon after and the race was abandoned. Fortunately, the sea breeze filled in around 13:00 to provide a solid day of racing. The first race began in about 5–6 knots, but finished in about 11–13 knots, which held for the afternoon and the following two races.

In the gold fleet, today’s race winners were Finland’s Monika Mikkola, Polish Agata Barwińska, and Mári Érdi of Hungary. “[Today was] a bit better day than the qualifying series for me,” shares Barwińska. “[But] it wasn’t easy out there – it was very tricky.” This high-scoring event has produced such tricky days with the up-and-down wind that consistency is the only way to end up on top.

Plasschaert slid into first overall by securing two sixth-place finishes today, along with a 22nd place, which was dropped. Overall, Plasschaert holds 34 net points heading into Day 5. Denmark’s Olympic gold medallist in Tokyo and bronze medallist in Rio, Anne-Marie Rindom, is making a slow and steady rise at this event. She was sitting lower on the leaderboard earlier in the week due to finishing 20th in Race 3, but after maintaining top-10 finishes aside from that 20th, she climbed into 10th place overall yesterday and now sits in second, just three points behind Plasschaert. Only one point behind Rindom is Wiktoria Gołębiowska of Poland in third overall. Gołębiowska finished with an eighth, a second, and a 14th today. “I just want to do my job.” Gołębiowska explains. “…In the end, you don’t really know which side is going to pay, so you have to be focused and concentrate all the time… and stay calm.”

In the men’s fleet, American Peter Barnard has held his lead at this regatta through today’s three races, finishing with a third, second, and first. “It was very challenging today,” says Barnard. “It was very shifty, and the pressure was up and down, and it was hard to make a game plan. I just stayed consistent and had good starts.” Americans Hamilton Barclay and William Baker hold second and third overall.

Three races are scheduled for tomorrow. For more information, follow the event at 2022ilca6.ilca-worlds.org