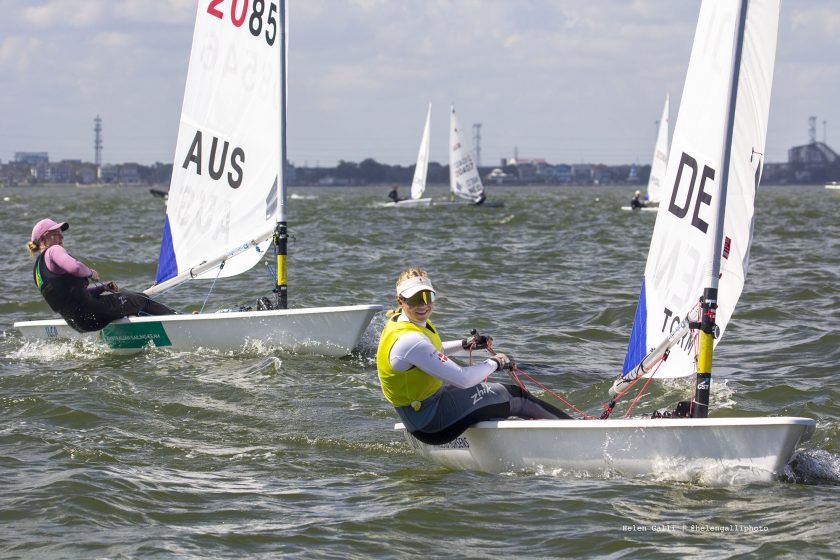 Heading into the final day, Rindom carried a 19-point lead. To protect her lead, she had to maintain the consistent performance she is known for, and that’s exactly what she did. The breeze on Galveston Bay was a steady 8–10 knots, and Sweden’s three-time Olympian and Tokyo silver medallist Josefin Olsson won the first race ahead of Rindom in second. The final race went to Julia Buesselberg of Germany, and Rindom placed ninth. Aside from Rindom’s 20th place in race 3, she had only top-10 finishes at this regatta, which was enough consistency for her to win the event by 20 points. “Today it was a bit stressful because I found myself in the same situation as last year at the Olympics and the year before at the Europeans,” Rindom shares. “It’s always very stressful to be in the leading position going into the last day. And of all people, I know how much you can lose and how much you can gain, so it was very exciting.” Switzerland’s Tokyo Olympian Maud Jayet rose to win silver at this world championship by locking in an eighth and third in today’s races, rounding out a steady, solid performance in Texas. Belgian Tokyo Olympian Emma Plasschaert claimed bronze, just two points behind Jayet.

In the men’s fleet, Barnard defended his lead on the final day and secured gold. “Today was very tricky as well,” notes Barnard. “The sea breeze kicked in and since it started left, it was a little more shifty. But overall, the event was very good… and we got good racing in.” American William Baker rose to second overall after two third-place finishes today. Those scores pushed Baker three points ahead of fellow countryman Hamilton Barclay, who finished with bronze.

The prizegiving ceremony will be held this evening. For more information, follow the event at 2022ilca6.ilca-worlds.org