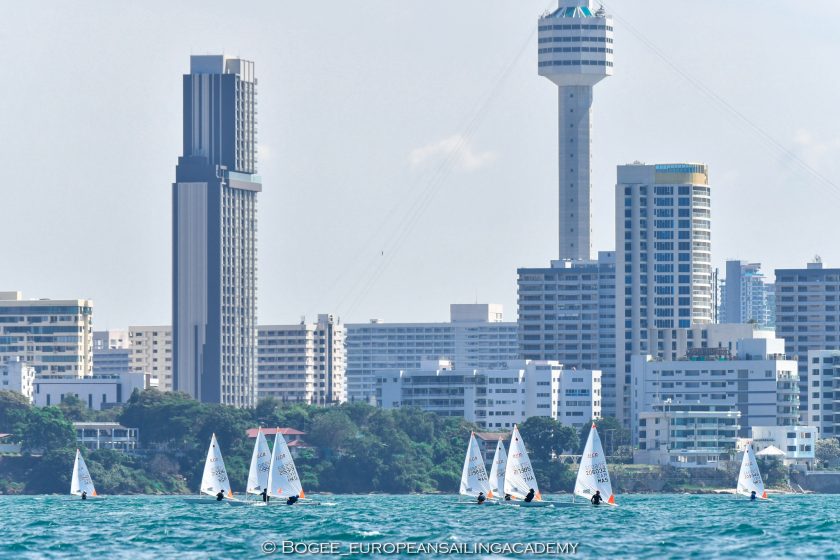 Pattaya, Thailand – The 2022 ILCA Asian Open Championships, organized by Thailand ILCA Class Association and the ILCA Asian Region, have come to a close after five days of exciting racing in a variety of different conditions. Sailors of all ages traveled to the Royal Varuna Yacht Club (RVYC) from across Asia to compete in the ILCA 4, ILCA 6, and ILCA 7. The beginning of the championships brought a somewhat shifty breeze of about 12 knots. Midway through the regatta, the wind built to about 12–14 knots, and by the final day of racing it was about 14–16 knots with gusts of 18–20 knots, ending the event on a high note.

In the ILCA 7 division, the three medalists had top-five finishes in all 10 races of the championship. With only 13 points, Malaysia’s Khairulnizam Mohd Afendy claimed gold, ahead of Thailand’s Arthit Romanyk who won silver with 21 points and Nicholas Bezy of Hong Kong who won bronze with 24 points. The ILCA 6 Men’s division had a wide range of competitors, from U19 to Masters sailors. The medalists all fell within the U19 division – Thailand’s Bowonnan Chanram was named champion, and his fellow countryman Christopher Marsh won silver and tied with India’s Sikhanshu Singh with 23 points.

All three medals of the ILCA 4 Girls division went to Thailand – Nopassorn Khunboonjan won the title ahead of U16 sailors Marion Grace Montgomery and Paranee Maungngam.

In the ILCA 4 Boys division, U16 sailor Weka Bhanubandh of Thailand won by a 36-point lead. U16 sailor Feodor Zoubovski of Cyprus won silver, and India’s Kiran Kumar Balle rounded out the podium in third.

Next up will be the 2023 ILCA 6 and ILCA 7 Masters World Championships in February, hosted once more by the RVYC at the same venue. The Masters sailors at this championship were able to have a test run for their big event next year.